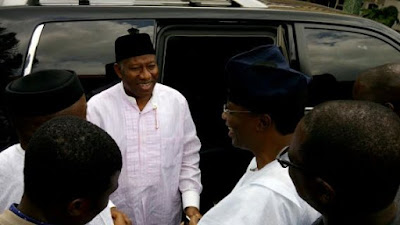 Former President Goodluck Jonathan said the death of HID Awolowo forced him and his wife out of their ‘hiding’ place as they intended to stay out of the public for at least a year.

The former president in company of his wife Patience Jonathan visited the Ikenne country home of the Awolowos to pay tributes to their matriarch, Hannah Idowu Dideolu, who passed on last Saturday.

Condoling with the family, the former President noted that HID Awolowo enjoyed a rare privilege by living extra 29 years, when compared to the biblical prescription of three scores and 10.

“My wife and I are not mourning because Mama has passed on. For me, we believe that it’s a rare privilege to add extra 29 years to the biblical three scores and 10; it’s not easy. Ordinarily, we wouldn’t have been mourning but Mama was a rare mother. She was a woman of virtue described in the Bible and she was a mother to all of us.

But in this particular case, we cannot hide. So, we have come for the condolence and to encourage our brothers and sisters that we are together. God brought her for all of us. She just had to be the direct mother of a few but she was a mother to all. We shall mourn more than even the direct children would.”

PHOTO: UK Woman Pays Hundreds Of Pounds To Erect A Billboard Informing Her Cheating Husband That It’s Over