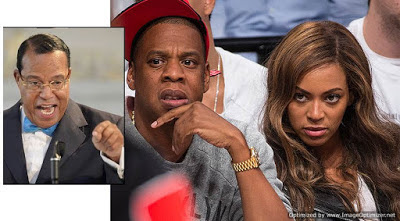 Read and lets know if you agree with him…
Louis Farrakhan is the leader of the radical religious group Nation of Islam, he has also served as the leader of mosques in Boston and Harlem.
And during a recent interview, Louis left many shocked when he exploded that Jay Z should teach Beyoncé to cover up her body when he was asked “What is [a woman’s] specific role as a female artist? Farrakhan said:

Help us to be more sane. A man is made into a dog by a way a woman presents herself to a man. There ain’t no preacher out there that’s that holy that a woman can disrobe herself and a man can still think Bible, still think Quran.
How do you rule a man? You rule him by the beauty of your body and the suggestion of sex. So when you strip a woman down, a man becomes a dog. You don’t make a man? You make him to treat you like an object of sex instead of the creative genius that you are.
You have to educate the managers. Jay Z is a good man. Jay Z is a good manager. But now, your woman is on display. Do you want men looking at your woman, being tempted by your woman, to make advances at your woman?
Mohammad said where there are no decent women, there are no decent men, for the woman is the mother of civilisation. Who wouldn’t want to be with Rihanna? Who wouldn’t want to be with Nick Minaj? But you strip them then their body is being used as the tool of the degradation of a woman and the subjection of a man.

Louis went on to speak about the ways in which women have been abused by the men they trusted in their lives. And then goes back to praising women and all the contributions they could possibly make to the world.

“There’s no man doing something that a woman can’t do, and in some cases do it better. Man is Hakeem. That’s the attribute of God, that means wise. She’s Hakeema that means God has made her to be a possessor of wisdom. Don’t degenerate your woman and make her nothing more than an object of sex. She’s more than that.
So I would encourage Jay Z–and I hope you’ll take it in the spirit that I give it, out of love for you and honor for your greatness and honor for the love and beauty and greatness of your wife. I would love to see our women clothed, demonstrating the gift of their talent.
The gift of their form should be seen by those who are worthy. You got an unworthy dog looking at something beautiful that he wants to paw at but can never have. Do you know what that does to a man, when he can see you and can’t have you? Then he wants to go home and attack a child.”

Singer Sean Tizzle Responds After Basketmouth Fish Him Out