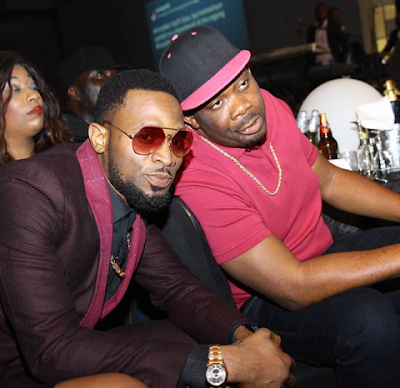 So, i got this gist from Vanguard…Read below;
D’banj as a singer and Don Jazzy the producer used to be the perfect team as the honchos of Mo’hits Records.

But like a bolt from the blue, their hitherto smooth relationship collapsed in 2012 like a pack of badly arranged cards.Ever since, fans and colleagues in the music industry have been begging the duo to come back together and rework their magic.

However, what could have been the perfect opportunity for the two heavyweights to address the issue came to pass on Sunday, September 20,at the Eko Hotel-venue of 2face Idibia’s Fortyfied Concert.

D’banj mounted the stage to perform some of his hit songs to the delight of the audience, and halfway through, he said he was going to perform a song, ‘Feeling Good’ produced by Don Jazzy and featuring 2face that was leaked online before it could be properly released.

He beckoned on Don Jazzy to join him on stage to perform the song, but Jazzy remained glued to his seat with new Mavin signees, Reekado Banks, Korede Bello, and Dija.

Even when 2face begged the duo to produce one more hit together, Don Jazzy remained resolute. In 2face’s words, ‘Don Jazzy and D’banj, abeg make una do one more song, just one…. I take God beg una.’

D’banj instantly responded with the words, “Sure! It’s going to happen,” while Don Jazzy still remained on his seat without even a smile.

This led many of the guests in attendance to insinuate that D’banj was more eager for a come-back than Don Jazzy is.

Etcetera Blames Every Nigerian For The Kidnap Of Olu Falae – Read