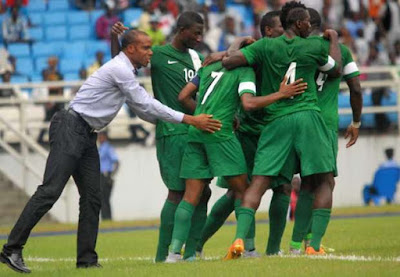 Nigeria yesterday in Brussels beat fierce rivals Cameroon 3-0 in a much improved display from the loss to DR Congo.

After the shambolic showing against DRC in Mons on Thursday, the Super Eagles raised their game against the Indomitable Lions of Cameroon to win this friendly and ease pressure on coach Sunday Oliseh after his major falling out with Lille goalkeeper Vincent Enyeama.

Nigeria deserved their lead in the 39th minute through Efe Ambrose. The Celtic defender rose above the Cameroon defense to power home a free kick from the right taken by Mikel Obi.

Incidentally, it was just minutes after Ambrose almost put the ball into his own net when his back pass beat an onrushing goalkeeper Carl Ikeme.

Outstanding Moses Simon scored his second Eagles goal on the hour when he blasted past the Cameroon goalkeeper after he was released by skipper Ahmed Musa.

Substitute Odion Ighalo took the game beyond the Indomitable Lions with a third goal two minutes from time when he headed home off a delightful cross by Elderson Echiejile from the left flank.

Cameroon would also struggle when skipper Stephane Mbia was sent off in the 47th minute after his second booking of the night.

Before then, Cameroon young goalkeeper Fabrice Ondoa had to pull off at least two big saves to deny the Super Eagles.

In the ninth minute, the Barcelona second team shot stopper had to go down quickly to keep out a menacing ball heading for goal. He will also get a strong hand to a pile driver by Emmanuel Emenike after 31 minutes.

But after Nigeria’s goal, Cameroon raised their game and ought to have at least drawn level particularly in the 44th minute when Spurs winger Clinton Njie got behind the Eagles defence, but Leonard Kweuku could not get a touch to the final pass from inside the six-yard box.