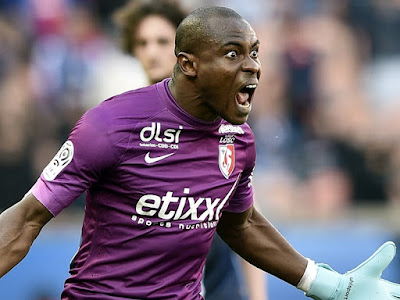 Yesterday, there was drama inside the Super Eagles camp late when coach Sunday Oliseh ordered captain Vincent Enyeama out of camp in Belgium but the France-based goalkeeper was persuaded to remain with the team by the Nigeria Football Federation officials.

Enyeama joined his national teammates in Belgium ahead of the two friendly games against Congo and Cameroon on Thursday and Sunday respectively but Oliseh was angry over the keeper’s late arrival to camp.

The Lille keeper arrived camp after Monday’s deadline, having been reportedly permitted to report late following Saturday’s burial of his mother in AkwaIbom.

But an angry Oliseh ordered Enyeama, who has 101 caps for Nigeria, out despite pleas from the keeper, who rose to apologise for coming late and wanted to give his reasons.

Oliseh reportedly told Enyeama to shut up but the Eagles captain didn’t comply, which made the coach call on security operatives to get the keeper out of Hotel Verviers, the camp site of the Eagles.

But officials of the NFF waded into the matter and persuaded Enyeama to remain in camp.

“It’s true that there was a little misunderstanding in the camp of @NGSuperEagles, but the matter has been resolved. Enyeama remains in camp,” the NFF said on Twitter.