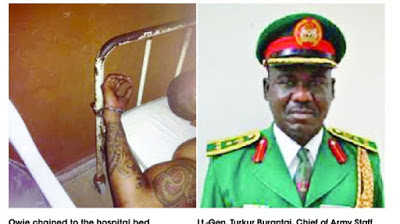 A man that was allegedly brutalised and shot on the leg by some soldiers in Benin, the Edo State capital, has raised alarm over what he called the inhuman treatment meted out to him.
But the Nigerian Army has insisted that the man, Mr. Daniel Owie, is an armed robber, who attempted to snatch the soldiers’ vehicle. The soldiers, who were reportedly led by an Army Captain, actually brutalised Owie before shooting him on the leg.

According to TheSun, in a petition to the Inspector-General of Police, Mr. Solomon Arase, the victim appealed to him to investigate the alleged murder attempt on his life and the breach of his fundamental human rights by
a group of soldiers led by a yet to be identified captain in Benin.

In the petition forwarded by his counsel, Mr. Benjamin Iluobe, Owie called on the IGP to direct the Edo State Commissioner of Police, Mr. Chris Ezike, to thoroughly investigate the abuse of power by the Army Captain and his gang.

Mr. Owie is currently receiving treatment at the University of Benin Teaching Hospital (UBTH) where he was chained to the bed allegedly on the orders of the Army Captain. The captain also detailed two soldiers to watch over him.

Owie said on October 3, about 8.pm, he met a vehicle that blocked Ihama Road and he went to the car to see if he could assist the owners to push the vehicle off the road.

He said that the occupants of the vehicle ordered him to go back to his car, adding that the way and manner they talked to him led to an exchange of words. He was subsequently given the beating of his life by the soldiers, he stated.

“Our client told us further that he was surprised that one of them introduced himself as a captain in the Nigerian Army and he further identified himself by brandishing his service pistol.

After the beating, the said the captain called his military boys, who came in a Hilux Pick-up van and, without questions and after he identified him to them, started to beat him again with fists and gun butt.

He further said he was shot on his leg on the instruction of the said captain. He also said that there were bruises all over his body, inflicted by the military men called by the captain.

”Owie alleged in the petition that after shooting him, they took him to the hospital in their military base along the Airport Road, Benin, where medical doctors on duty told them that they would not admit him on the ground that the military men were not consistent in their statement as per how he was shot.

He said he was later taken to the University of Benin Teaching Hospital where he was admitted.
He also alleged that his KIA SUV, two handsets, wristwatch and eyeglasses were taken away from him by the said captain and his boys.

“As if (as an) afterthought, at about 10am on Sunday, October 4, 2015, the said captain led other military officers to the University of Benin Teaching Hospital to handcuff him to the bed and detailed two military men to watch over him. They alleged that he was shot because he wanted to snatch their car from them,” the petition said.

But in a swift reaction, spokesman of the 4 Brigade of the Nigerian Army, Benin, Capt. Joseph Unuakhalu, said Owie was a member of a robbery gang, who robbed an army officer along Ihama Road on the fateful day and was arrested by personnel of the Nigerian Air Force.
The Army statement reads:

“At about 10:30pm on 3 October 2015, Troops of 4 Brigade Garrison responding to a distress call, rescued an army officer, who was attacked by suspected armed robbers at Ihama Junction, along Airport Road, Benin city. During the attack, the officers index finger was cut off by the suspected robbers.

Earlier, the gang robbed two policemen from Lagos Command, who came for their colleague’s wedding. Prior to the troops’ arrival, personnel of the Nigerian Air Force close to the scene responded and arrested one of the suspected robbers, Mr. Daniel Owie, while others ran away abandoning a Kia Sportage Jeep with Reg No EDO BEN 190 BR.

He was handed over to our troops on arrival. However, the suspect attempted to escape and was shot on his left leg. Suspect is currently receiving treatment at UBTH while investigations are ongoing.”

At the time of this report, Owie was still receiving treatment at the hospital. When contacted, medical director of the hospital, Prof. Michael Ibadin, said he was not aware of the development.

Too Bad! 74 Year Old British Man Sentenced To 350 Lashes In Saudi Arabia (See What He Did)

Revealed: See Who Is Behind Improved Power Supply In Nigeria