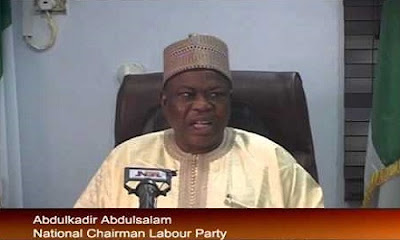 National Chairman of the Labour Party (LP), Alhaji Abdulkadir Abdulsalam, on Tuesday, expressed disappointment over the ministerial nominees of President Muhammadu Buhari, saying that most of the names on the list were analogue people who have nothing to contribute.

The LP boss who wondered why President Buhari could not fulfill the promise he made to Nigerian youths during the electioneering campaign, said: “For us in Labour Party, we do not see anything that resembles change as far as the ministerial team is concerned. Imagine bringing someone who served in the government of the late Sarduana of Sokoto to serve as minister in 2015.

“Buhari has nothing to offer Nigeria. There is no promise of change at all. All these people are analogue persons who cannot bring about any change under the current dispensation,” he said.

On the fight against graft, Abdulsalam described most of those that made the Buhari team as far from the clean Nigerians being touted, adding that most of the former governors on the list are being investigated by the anti-graft agencies.

“It is also very unfortunate that Nigerian youth who make up the greater percentage of our population and who voted for Buhari massively were not given their due share in the ministerial nomination,” he decried.

How PREMIUM TIMES Editor Was Arrested By SSS (Pictured)