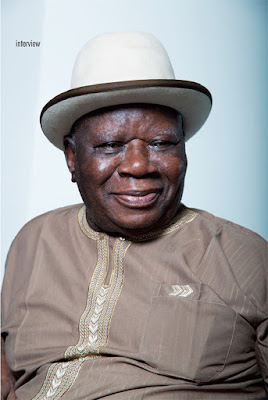 Hmm! all these our politicians tho lol!..so,a former Federal Commissioner of Information, Chief Edwin Clark, has hailed the anti-corruption crusade of President Muhammadu Buhari and knocked former President Goodluck Jonathan for lacking the political will to fight graft.

Clark, who said it was wrong for anyone to accuse President Buhari of fighting a selective war in his drive to return sanity into the polity, also declared that he had formally left the Peoples Democratic Party.

Clark called on Nigerians not to distract the President from achieving his goal, just as he appealed to the President to remain focused in his determination to rid the country of corruption.

The Ijaw leader spoke in Abuja on Wednesday when a group, Think Nigeria First Initiative, paid him a courtesy call in his Abuja residence.

He said, “Jonathan didn’t have the political will to fight corruption. He’s a gentleman. Drivers of yesterday are living in palatial buildings now under his government.

“In advanced countries, when you are living above your means, people query you. That’s not so in Nigeria. Former governors, lawmakers are now asking for immunity.”

Clark, who was a staunch supporter of former President Jonathan, however, said he had quit the PDP. But he said he would not join the governing party, the All Progressives Congress.

He said, “I no longer belong to the PDP. I won’t go to the APC either, but I will continue to talk as an elder statesman and leader of this country. I have left politics.

“If anyone comes to me to say he’s running for any elective position in the PDP or the APC, I won’t support you. I’m not a member of the PDP anymore.”

It was however not clear if Clark quit the party because of the defeat suffered by Jonathan during the last presidential election.

He had also said that he and other supporters of former President Jonathan were worried because of the outcome of the last presidential election. He, however, added that there was nothing they could do since the former President had conceded defeat.

Some of us were worried when Jonathan conceded defeat. We were worried. If a man who contested election conceded defeat, who are you to say no?
“Elections had been held, winners had emerged and losers had agreed, what next? Buhari is now my President and the President of Nigeria.
“We should all try and support him, particularly in his determination to eradicate corruption in Nigeria. For eight years Obasanjo legalised corruption.
“Yet, he’s the one talking about corruption today. Nobody should distract Buhari from fighting corruption. People should stop talking about sectional or selective justice.”

Clark said those who ruled the country before Buhari, like the late President Umaru Yar’Adua and Jonathan didn’t have the political will to fight corruption.

He specifically accused Yar’Adua of being a friend to the jailed former Governor of Delta State, James Ibori.

“Yar’Adua became friend with Ibori, who is very corrupt and because of this, he could not fight corruption.”

In his reaction to Clark’s dumping of the PDP, the National Publicity Secretary of the party, Chief Olisa Metuh, said the party would want to wish the elder statesman well.

“He is a man we respect so much. If he’s leaving our party and wants to retire from politics, we wish him well,” Metuh said.