Award-winning singer and songwriter, Niniola has academically assisted 30 students by obtaining JAMB forms for them.

It was gathered that this was a gesture being carried out through her foundation “Adopt A Child’s Education”.

According to Niniola, buying JAMB Forms for 30 students was her way of “stepping into her late father’s shoes, a man who was known for his advocacy for standard education for every child”.

She wrote on Instagram; “I promised to do more and Walk in my Late Dads shoes…

In continuation 2day I through my foundation @adoptachildseducationprovided 30 jamb forms for some students. Lets Put some smile on the kids faces.”

Niniola, who rose to stardom after finishing as the third runner-up in the sixth season of Project Fame West Africa and became more popular with her songs, “Ibadi” and “Maradonna.” 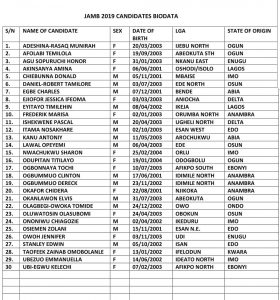