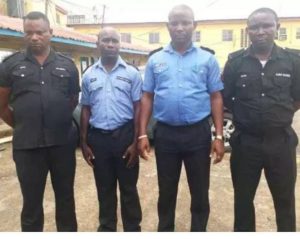 The Police Command’s spokesman, DSP Bala Elkana, made this confirmation while speaking to newsmen in Lagos State.

Elkana added that the policemen have been arrested and subjected to orderly room trial after a video of their alleged action went viral on social media.

“Attention of Lagos State Police Command was drawn to a video on social media showing some Police officers shooting two unarmed suspects who were arrested and already in their custody against the code of professional conduct and laws guiding how suspects in Police custody should be treated.

“The incident happened on Aug. 8 at 3.00pm, when Iba Police Station received a distress call from one Anugu Valentine that he was attacked by a group of armed men numbering about four on two motorcycles at Ipayi area, Iba and they dispossessed him of one iPhone max valued at N450, 000.

“Two of the armed robbers were arrested while two escaped. Two locally made pistols with six life cartridges and five expended cartridges were recovered,” he said.