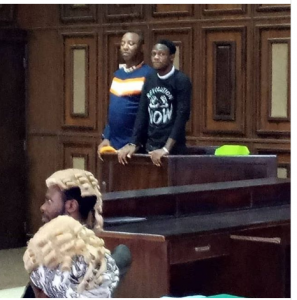 The famous criminal DSS lawyers harrasing Sowore in court the last time didn’t show up in court, new lawyers are now in charge

When asked for evidence they were expected to present today against Sowore and Bakare, as agreed from the last court appearance, the lawyers said they are not aware of those charges therefore have no evidence to present. (Ah! Not aware je? Se e mad ni

. The copy of the trumped up, bogus charges is online, print it out you mumus)
The judge asked if they have evidence for the amended new charges, they said no. The lawyers then asked that court give them more time to present evidence on the new charges.

The angry judge knew it was the plan to delay the bogus trial and keep Sowore in Abuja in perpetuity. She ordered DSS/FG to pay Sowore/Bakare the sum of N200,000 as fine for asking for frivolous adjournment and the confirmation of the paid fine to Sowore must be presented by DSS to court on Thursday, tomorrow, or she would discontinue the trial… Justice Ojukwu should dismiss this sham treason trial by this time tomorrow