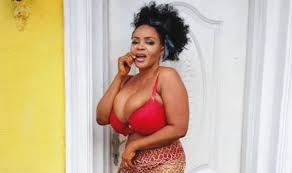 Nigerian actress and singer, Cossy Orjiakor has taken to her Instagram page to gush over German boyfriend’s recent act of love.

The young man decided to honor his relationship with the actress by getting her name as well as a poem dedicated to her inked on his back.

Taking to the photo-sharing app, the controversial actress shared a video with a caption which reads;

”My baby boo boo…. he didn’t just tattoo my name ….Cossybarbie….he inked a whole poem ….. Am so inlove with my German machine“

Watch the video below: