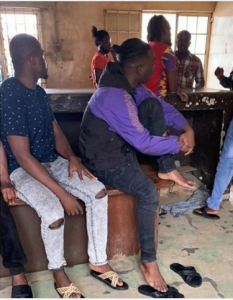 Oyindamola Johnson Emmanuel, popularly known as Dammy Krane, is a Nigerian singer, composer and performer. In January 2012, at age 20, he signed a record deal with Hypertek Digital and 960 Music Group. He is most famous for his single hit “My Dear”.

The Nigerian singer is spotted in police station yet again, as this is not the first time the singer is found in police custody due to a crime he committed.

Although his crime this time around is yet to be known,

he might have done something wrong to be found in prison.