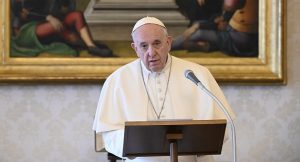 Pope Francis said on Wednesday “we cannot tolerate or turn a blind eye to racism”, in reaction to the killing of a black man by US police that has sparked nationwide protests.

But the pontiff also condemned the violence that followed George Floyd’s death in the city of Minneapolis last week as “self-destructive and self-defeating”.

“Nothing is gained by violence and so much is lost,” Francis said.

The pope said he was praying for Floyd and “all those others who have lost their lives as a result of the sin of racism”.

Protests have been held in cities across the country, mostly peaceful but many descending into mayhem.

Both activists and officials have blamed rabble-rousers for the trouble and thousands of people have been arrested.