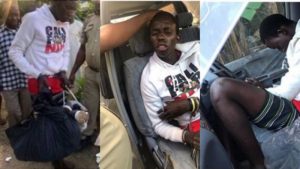 In a funny twist, a thief has gotten more than he bargained for after he fell asleep during an operation in Tanzania.

The classic example of the adage that goes; “Many days for a thief, one day for the owner” has gone viral since its report.

The thief has been handed over to the police in Tanzania.

He reportedly fell asleep during an operation at ITV Zanzibar presenter, Farouk Karim’s house.
According to the journalist, the suspect had jumped over his gate and stole shoes and clothes.
However, he went into his car but later fell asleep.

Farouk said he was shocked when he woke up to find the unknown man taking a nap in his car. He was subsequently handcuffed and handed over to the police.