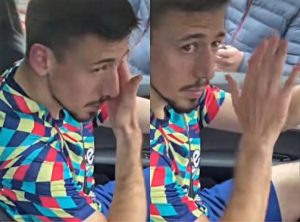 Barcelona defender Clement Lenglet broke down in tears when fans approached his car, after his foul gave away a penalty to Cadiz.

In the match against Cadiz, Lionel Messi gave Barcelona the lead through a penalty early on.

Barcelona appeared to have won the match and secured all points before Clement Lenglet’s poor tackle.

In the closing stages of the match, Lenglet’s poor tackle challenge gave Cadiz a penalty in the 89th minute.

Alex Fernandez scored from the spot for Cadiz to make it 1-1.

In the video; Lenglet was leaving the Barcelona stadium when he was approached and he broke down in tears.