Dr. Dre who has been dealing with his marriage crash and his health has been newly accused of domestic violence by his wife, Nicole Young in a new divorce filing. 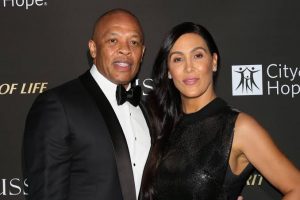 According to court papers seen by Daily Mail, Dre was accused of holding a gun to his wife’s head, punching her in the face, slamming her against a wall, and lifting her off the ground by her neck.

Dre and Young married in 1995. They announced last July that they were divorcing due to irreconcilable differences. Speaking about the allegations, Nicole said:

Andre held a gun to my head on two occasions, on January 8, 2000, and November 20, 2001. Andre has punched me in the head/face on two occasions, in 1999 and on January 8, 2000. Andre kicked down the door to a bedroom in which I was hiding from his rage in 2016. Andre conspicuously omits the fact that the police were called in approximately September 1995, shortly before our marriage, after he slammed me up against a wall and lifted me off the floor by my neck. During our marriage, I considered calling the police several times but, as I fell deeper into the abusive relationship, my fear of Andre outweighed any confidence I had that the police could help me. ‘Andre has verbally and emotionally decimated my personhood to the extent that I currently suffer from post-traumatic stress syndrome’.

She also named three of his alleged mistresses – singer Jillian Speer, model turned skincare entrepreneur Kili Anderson and Crystal Rogers, aka Crystal Sierra, known as the ‘Queen of Latin hip-hop’ – and asked a judge to subpoena them as witnesses in the divorce trial.

However, Dre has debunked the allegations by Nicole, he said; “at no time did I abuse Nicole or threaten her physical safety” according to reports by The Daily Mail.

The rapper, real name Andre Young, is currently receiving treatment in the ICU of a Los Angeles hospital after suffering a brain aneurysm on 4 January.