A pastor has allegedly been injured and many houses burnt by irate youths who went on the rampage over alleged blasphemy in the Katangan area of Warji Local Government Area of Bauchi State.

Details of the incident were still sketchy as of the time of filing this report.

It was learnt that trouble started when a message was allegedly circulated on social media that a Christian girl in the town allegedly engaged in blasphemy of Islam.

A source, who spoke to newsmen confirmed the incident, saying, “Yes, the incident is true. It is an aftermath of the incident of the alleged blasphemy that happened in Sokoto last week.

“What I learnt was that a Christian girl allegedly posted and commented on something on social media which has to do with the incident in Sokoto and that was how it started.

“The situation there is more than tension since many houses have been burnt down. But no life that was lost, to the best of my knowledge.

“A shop which belongs to an ECWA Church in the area was also burnt down. And I learnt that the District Head of the area and the leaders are on top of the situation. The police have also been informed about it.”

Another source said, “We were at home this evening when we heard shouts from some muslim youths in their numbers who went on the rampage and besieged an ECWA Church in the area.

“But Christian youths and others resisted and repelled them but that was after they had burnt down a shop attached to the church. Many houses were burnt down by the rampaging youths.

“In the process, one of the pastors of the ECWA church was seriously wounded; as I speak to you now, efforts are on to save his life.”

One of the leaders of the Christian Association of Nigeria in the state also confirmed the incident to journalists in a telephone interview.

Representatives of the group led by Muhammed Muritala Chukwuemeka disclosed this on Tuesday during a courtesy call to Daily Trust head office in Abuja.

Speaking during the visit, Chukwuemeka, a native of Orlu LGA of Imo state, said it took him five years to complete the translation.

While describing Islam as a religion of peace that forbids killing of fellow humans, Chukwuemeka said he and his team have decided to spread Allah’s message to the Igbo through the translated Quran.

He called on Nigerians to attend the launch which will take place immediately after Juma’at prayer at Ansar-ud-deen mosque located in Maitama, Abuja.

He also called on Nigerians to support mass production of the holy book in order to spread Allah’s peaceful message to the Igbo in the south-east and other parts of Nigeria.

“It took me not less than five years before completing the translation. We are calling on well-to-do Nigerians to assist in mass production of the holy book. Presently, we have printed 500 copies and 100 copies have already been sent to the south-east,” he said.

The Catholic diocese of Enugu has barred all clergy and the faithful from attending any religious activity at the Adoration Ministries, Enugu, Nigeria (AMEN).

Ejike Mbaka, spiritual director of AMEN, had sparked controversy early this week when he described Peter Obi, presidential candidate of Labour Party (LP), as “stingy”, asking his followers not to vote for him in the 2023 presidential election.

Mbaka’s comment had elicited widespread criticism from many Nigerians and the Enugu Catholic diocese. The diocese had said Mbaka’s comments were a “clear violation” of the provisions of the canon law “which forbids priests from engaging in partisan politics”.

But on Wednesday, Mbaka apologised and asked for forgiveness from Obi’s supporters, saying he was misunderstood.

In a statement issued on Saturday, Callistus Onaga, bishop of the diocese, asked all “clergy, religious and lay faithful” to desist from attending “all religious and liturgical activities” of AMEN “until the due canonical process initiated by the Diocese is concluded”.

The bishop added that Mbaka has “persistently” violated the teachings of the Catholic church.

“In the light of the happenings in the Catholic Adoration Ministry Chaplaincy Enugu capable of undermining the Catholic faith and teachings; and after several fraternal corrections and admonitions to Fr. Camillus Ejike Mbaka, the Chaplain of the Ministry Chaplaincy, which he persistently violated; and in the fulfilment of my pastoral duties as the Chief Shepherd with the obligation to promote and safeguard the Catholic faith and morals in Enugu Diocese, I hereby prohibit all Catholics (clergy, religious and lay faithful) henceforth from attending all religious and liturgical activities of the Catholic Adoration Ministry until the due canonical process initiated by the Diocese is concluded,” the statement reads.

“I enjoin all the Christian faithful to keep praying for Fr. Mbaka and the Catholic Diocese of Enugu as I entrust him and the Diocese to the maternal care and protection of the blessed Virgin Mary, Queen of the Apostles.” 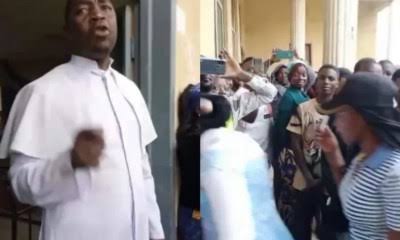 The Catholic Diocese of Pankshin, Plateau state, has dissociated itself from the action of a priest who prevented worshippers from attending mass.

On Sunday, a video of a priest, said to be from a Catholic church in Plateau, went viral as the cleric prevented residents without permanent voter cards (PVCs) from attending mass.

Speaking on the development in a statement issued on Monday, Andrew Dewan, director of communications of the diocese, said such action goes against the policy of the church.

“The attention of His Lordship, Most Rev. Michael Gobal Gokum, the Catholic Bishop of Pankshin, has been drawn to a video in circulation by Rev. Fr. Kefas Gogwim, in which he prevented some Catholic worshippers from attending mass because they did not have their voter’s cards with them,” the statement reads.

“The action of this priest did not have the approval of the Bishop, neither is it the policy of the diocese.

“Hence, the Diocese disassociates itself from this video in circulation and regrets the unfortunate incident, much as parishioners are encouraged to obtain their PVCs to exercise their civic duties.”