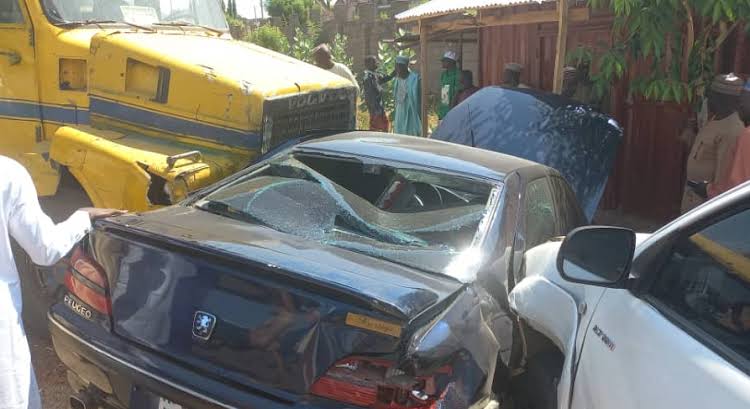 Four persons have reportedly died from a ghastly accident involving a Toyota Hilux conveying a detachment of vigilantes, accompanying Governor of Adamawa State, Ahmadu Fintiri, while enroute Mubi for a campaign engagement.

The accident which occurred around Fadamareke, in Hong Local Government, allegedly linked to overspeeding while negotiating a dangerous bend, involved a RAMP 2 Toyota Hilux van used by Head of Fintiri’s vigilante.

Three lifeless bodies of occupants in the van that includes Bako Kaura, head of PDP’s informal security arm and another victim identified as Adamu, Kaura’s biological son have been deposited at the mortuary of Hong Federal Medical Centre.

Five other occupants in the van who sustained various degree of injuries, were conveyed in the government house ambulance and another unmarked Hilux van, for treatment in a health facility. Governor Fintiri’s personal physician and head of the government house clinic, Dr. William Teri, who was among the first responders at the crash also conveyed the victims to a hospital for treatment.

A source at the scene of the accident who helped with the evacuation and rescue effort, however, said “I took out three lifeless bodies, but there’s a fourth that I think can hardly make it out of coma because of the injury he sustained. There were about nine occupants in the Ramp 2 Hilux van the head of vigilantes for Fintiri/Farauta campaign involved in the accident was traveling in.”

Only last week, Governor Fintiri narrowly escaped death by the whispers when a truck which lost control almost rammed into his stationary motorcade. Unfortunately, two vehicles on his convoy, were not so lucky as the truck crushed into them. 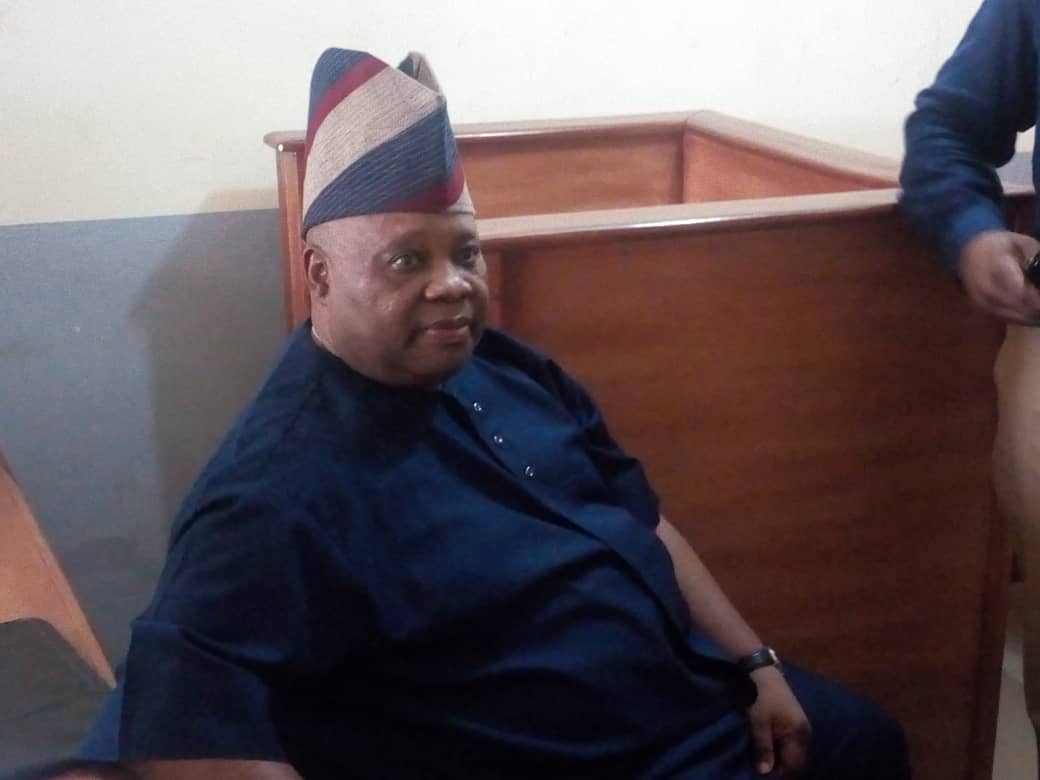 The Osun State Governorship Election Petition Tribunal sitting in Osogbo has sacked Governor Ademola Adeleke as the duly elected governor of the state.

The tribunal in a split document of two to one declared that the Independent National Electoral Commission, INEC, should withdraw the Certificate of Return issued to Adeleke and issue the same to former Governor Adegboyega Oyetola

The majority judgement which was read by the Chairman, Justice Tertse Kume said Oyetola scored the majority lawful votes of 314,931 against Adeleke’s 219,666.

The minority judgement is ongoing. 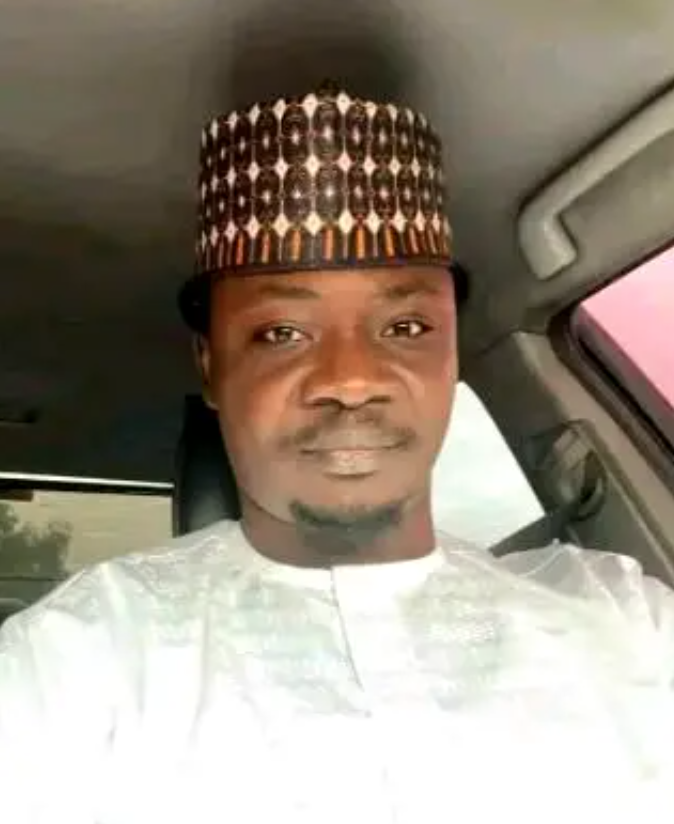 The Governor of Nasarawa State, Engr Abdullahi A. Sule has loss his son, Alhaji Hassan AA Sule at the early hours of Friday.

It was gathered that Hassan died after a brief illness.Meanwhile, condolences have started pouring in following the demise of the governor’s son.

In a condolence message signed by the Publisher of Eggonnews, Matthew Kuju and made available to newsmen in Lafia at about 5.30 am, reads: “it is with pains in our hearts to learn of the passage of your dear son, Hassan. No doubt, it is very painful when a father has to bury a son, but only Allah can explain such happenings.

“We pray May Allah raise him among the righteous and grant him aljannah Firdausi, and may Allah grant the family the fortitude to bear this painful demise.

In a similar message, the Honourable member representing Lafia North Constituency at the Nasarawa State House of Assembly Hon. Barr. Muhammed Ibrahim Alkali said he received with great shock the passing of the Son of His Excellency, the Executive Governor of Nasarawa State Alh. Hassan Abdullahi Sule.

In a Condolence message to the Executive Governor of Nasarawa State, His Excellency Engr. Abdullahi A. Sule, the Lawmaker described the death of the governor’s Son as a colossal loss not only to Nasarawa State but the Nation at large.

Hon. Alkali prayed God almighty to forgive the deceased all his short comings and grant him Aljanatul Firdaus as his final abode.

“I share my deep condolences with His Excellency, Engr Abdullahi A. Sule, over the passing of his beloved son Alh. Hassan. I pray that Allah (SWT) grants him Aljanatul Firdaus and comfort his family” the statement,’ added. 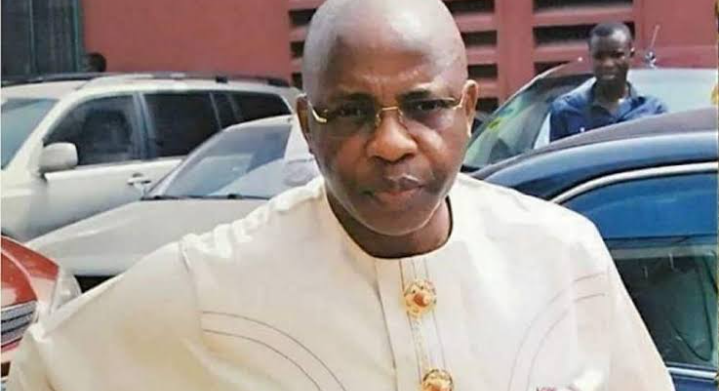 Four police officers have been reportedly killed during an attack on the convoy of Ikedi Ohakim, a former governor of Imo state.

The incident was said to have happened on Monday evening at Oriagu in Ehime Mbano LGA of Imo state.

According to Punch, the former Imo governor escaped death by the whiskers as the gunmen bombed the backup vehicle in his convoy.

The former governor was said to have been returning from a visit alongside his two children when the incident happened.

A source close to the governor reportedly said it took the bravery of the driver for Ohakim to escape.

“His excellency was the main target but his driver was smart enough to beat them because they were driving to block him,” the source said.

“Disappointed that their main target had escaped, they blocked his backup vehicle and burnt it. The four policemen with him were burnt.”