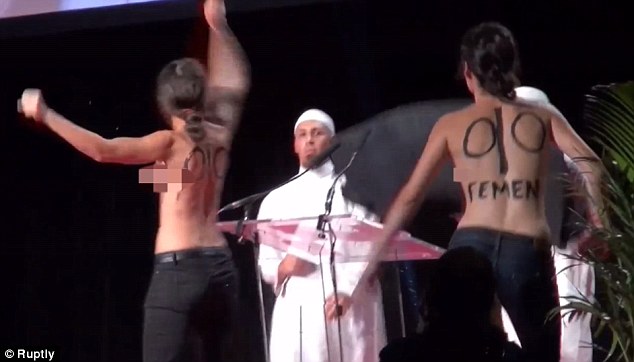 Two feminist activists have been beaten and dragged off scene when they removed their cloths and bra and jumped on stage in a bid to interrupt a Muslim conference held over the weekend in Paris.
The two activists believed to be members of the famous feminist group ‘Femen‘ stormed and disrupted a Muslim conference in France where the men reportedly were discussing whether husbands are allowed to beat their wives according to Islam’s teaching.

They ran on stage in front of two imams reportedly discussing whether it is right to beat a woman or not, screaming “No one can enslave me, no one can possess me, I am my own prophet!” A slogan also written on their naked chests. FEMEN claims its female activists were protesting against “womanophobia” and violence against women they say is widespread among Muslims, as stated in an online release.

“FEMEN is calling for mass opposition against the uprising of those womanophobe integrisms and for a strong answer from our institutions. Womanophobia is illegal. Sexism is a kind of racism. Modern slavery is a crime. Let’s condemn them together, and let’s remind them without ever losing any ounce of strength: No one can enslave me, no one can possess me, I am my own prophet!” The FEMEN France message on Facebook said, calling the two feminists “our topless jihadists”. .. 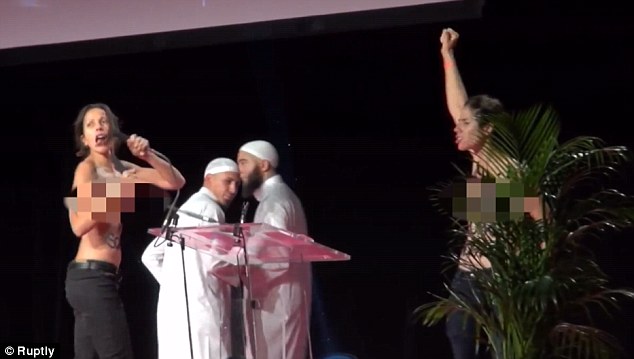 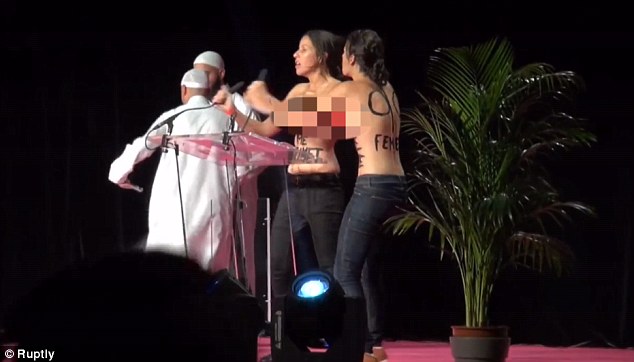 Thereafter, both partly nude women were dragged off by security personnel and, as it can clearly be seen on the video of the incident, They were slapped and kicked by an unidentified man. The activists were later detained by police and released later that night. The organizers of the salon announced their plan to file a lawsuit against the activists who interrupted the event.
I wonder how some men can easily hit and kick a woman like this no matter the provocation.
Really!!!!!!!!!!!!!
Related Topics:
Up Next

DJ Sues Taylor Singer After Being Accused Of Grabbing Her ButtSun