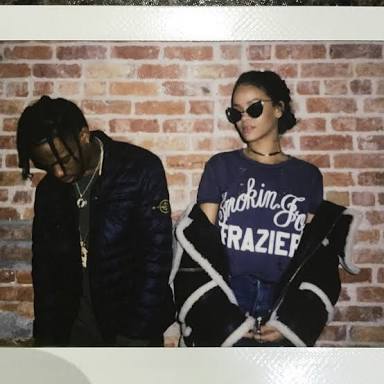 Rihanna has been spending a lot of time with Travis Scott lately, and RiRi’s fans are starting to get a little peeved that she hasn’t released her highly-anticipated album, ‘R8.’ They’re even starting to blame the rapper for prolonging the delay!

Rihanna, 27, and Travis Scott, 23, are practically inseparable. The pair was recently caught making out at a NYFW after-party. While Ri’s fans are all about the singer finding love, they are beginning to point fingers at Travis as the reason why her eighth album, R8, has yet to get an official release date. Are they overreacting or totally on point?

Lmao! Continue to read more
Rihanna fans around the globe have been waiting all summer to see if the singer will release R8. We’ve been waiting a long time for a new Rihanna album — yeah, it’s been three years since the release ofUnapologetic. Rihanna hasn’t released a new single for her upcoming eighth album since “Bi*ch Better Have My Money” in March 2015.

Fans are now getting very impatient with Ri and are blaming her constant hangout sessions and budding romance with Travis for the delay. Check out their tweets!

I totally admire Rihanna for taking her time with her new album, but we also want new music!

It appears that Rihanna and Travis may have been working on something for the album — an alleged track titled “Tourist”featuring the two of them leaked in March 2015….
Related Topics:
Up Next

DJ Sues Taylor Singer After Being Accused Of Grabbing Her ButtSun

“I Love His Music”: Jidenna Gushes About Wizkid