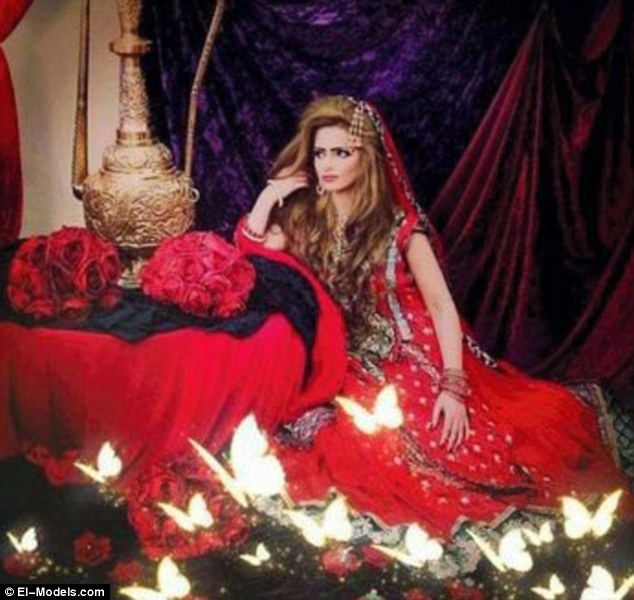 A model was found hanged after fearing she was about to be forced into an arranged marriage by her Muslim parents.Nadia Menaz, 24, was found dead at her home in Oldham, Greater Manchester in May, five months after taking out a court order to stop her family from forcing her to marry.

The mother-of-one had already married in an Islamic ceremony, but the union was not recognised under English law, and her family did not approve of her husband, Umar Rasool.

Ms Menaz, a former army cadet who had wanted to join the police but started modelling after leaving home at 16, had met Mr Rasool, 25, in 2010.

They began dating, initially keeping their relationship hidden from her parents until they married in an Islamic ceremony in April 2011. The marriage was never formally confirmed under English law, but the couple had a daughter who was born in March 2012.
In December last year, Ms Menaz took out a forced marriage protection order at the Family Court in Manchester against her father Sabir Hussain, 60, and her mother Ruksana Kousar, 55, and three of her eight siblings. According to government guidelines, the legislation protects women if they are being threatened with a forced marriage or are already within a forced marriage.

At the hearing, Mr Hussain and Mrs Kousar denied attempting to force Ms Menaz into marriage and initially claimed they were unaware of the forced marriage protection order.

Speaking through an interpreter, Mr Hussain told the hearing:

‘Once she got married there was no point in having issues. He used to assault her physically. They used to have a lot of arguments at home.

‘When I found out about the marriage protection order I was still in contact with her and totally shocked. I don’t believe my daughter killed herself. All of her life I never realised and never sensed it that she was having any problems that could cause her death this way. I think my daughter has been killed and she has not died in the way described.’

Mr Hussain said since her death he had received text messages from Nadia’s phone number which said: ‘Nadia has passed away but now it’s your turn. You are going to be next.’

‘Nadia was already married and she had a daughter as well so there was no point of having this forced marriage protection order.’

Ms Menaz, the second youngest child of five sisters and three brothers who also worked as a wedding planner and florist, had been ‘distressed’ prior to her death, according to her cousin.
‘She was quite distressed about quite a few things,’ Mohammad Nakash Ali, said.

‘She told me she was stressed about things that has happened in the past and she was dealing with things by self-harming. She said her relationship with her immediate family was very strained, she tried very hard to make amends but it wouldn’t work.’

In the weeks before her death Ms Menaz underwent psychiatric treatment at Royal Oldham Hospital but was later discharged.
On the day she died, May 1, she had argued with Mr Rasool, who then went to see his family and go to their local mosque, the court heard.
She had sent him a text saying she was going to hang herself and when he returned home at around 6.30pm he found his wife’s body.
Culled from Daily Mail
Related Topics:
Up Next

Too Bad! See What Lagos Hospital Did To This Woman Over Unpaid Bills