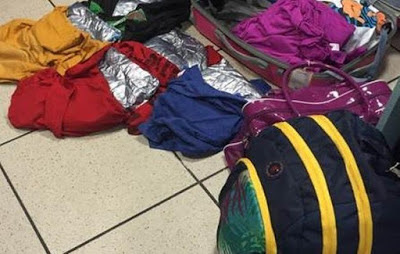 According to Eyewitness News, The South African actress whose identity will be revealed tomorrow when she appears in court was arrested at Tambo International Airport on Sunday, September 27, as she arrived from Abu Dhabi, South African Revenue Service said in a statement‚ describing it as “a significant seizure”.

The actress‚ who has appeared in several soapies including Scandal and Isidingo had unsuccessfully tried to slip past Customs officials.

Officials discovered 15.4 kilograms of ephedrine in her bag. SARS said the narcotics have an estimated street value of R4.6 million.

“The passenger‚ who was proceeding through the ‘Nothing to declare channel-Green channel’‚ was stopped by Customs officials for her bags to be scanned. The scanning of her one bag showed up suspicious images. Upon further investigation and searching of the bag‚ officials discovered 15 parcels wrapped in carbon/foil-like material hidden in the luggage.

Immediate tests conducted by SARS officials confirmed that the suspected substance was ephedrine‚ which is the main ingredient in crystal meth.The narcotics and passenger‚ identified as a South African actress‚ were detained and subsequently handed over to South African Police Service (SAPS) Organised Crime for further investigation”

The revenue services’ Luther Lebelo says the actress will appear in the Kempton Park Magistrates Court on Tuesday, September 29. –