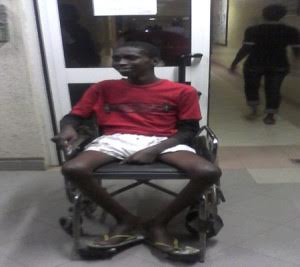 Gov Ambode’s new AKA is the The Listening Governor’ lol… Below is a father’s passionate appeal to the Lagos state governor, Akinwunmi Ambode to help offset his son’s medical bills at the Lagos state hospital where he has been held hostage following their inability to pay the bills.
According to him, He Says
On Saturday, April 25, 2015, my eldest son Jotham Edgar-Oluwa Ororho left me at home to go to our place of worship to help in cleaning the House of God, in company of his younger brother Johan. They had gone to prepare the place for a programme we were to have that evening. This was after he had prepared breakfast for the family.

Continue to read his plea….
But 15 minutes later, I received a call from Brother Baldwin Eze. He said, “Good morning brother, where are you?” I replied that I was about to have my breakfast. “Hurry downstairs and you will meet Brothers Shadrach Ochuba and Bayo, they are taking your son to the hospital.”

I hurried downstairs and when I got into the car, Jotham was already unconscious. He remained that way until Saturday, May 16, 2015, a period of 21 days. Those three weeks were the worst three weeks of my life. His journey started from Medical Emergency at the Lagos State University Teaching Hospital (LASUTH), to the Theatre and after a two-hour surgery, he was bed-ridden to the Intensive Care Unit (ICU) of the Surgical Emergency Department and placed on Life Support Machine. 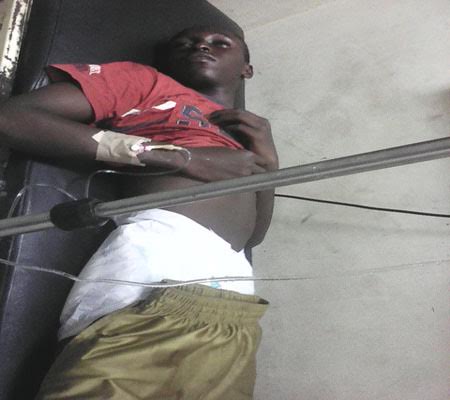 His surgeon, Dr Idowu told us that our son was suffering from Inter-Cranial Haemorrhage. This means that there is a rupture in the veins supplying blood to his brain and as a result, a part of his brain has been clothed by blood. The CT scan we did confirmed the surgeon’s fears. My wife Omolara and I were perplexed beyond compare as we never bargained for this.
However, God was with Jotham and the medical personnel, starting from Dr Idowu and his team, through to the staff at ICU gave us reason to hope that our boy would live. I would describe them as some of the nicest people I ever met. After about one month plus some weeks, Jotham was transferred to the BT Cardiac and Neurology Ward where we spent another one month plus. On the total, we have spent some four months and two weeks as at Saturday, September 12, 2015, sleeping on the floor and waiting for our boy to get well.
Our balance now stands at one million, one hundred and fifty-five thousand Naira (N1, 155,000). To be candid, our resources have been depleted and it is impossible for us to pay the balance after spending about two million Naira (N2,000,000) at LASUTH.
My wife works at one of the local council development areas in Lagos State. Besides, her mother is from Lagos State. When she sought assistance from the State Government in taking advantage of Lagos State Free Health Care Programme, she was asked to write a letter to The Chief Medical Director at LASUTH THRROUGH the Director, Clinical Services and Training.
She did. A later directive was that she should write to the State Government. She did again and the letter was addressed to the State Government, which ought to give the directive to LASUTH to release Jotham after his discharge from hospital. The Government wrote back to the Chief Medical Director asking LASUTH to allow us take advantage of the state’s Free Health Care programme.
Unfortunately, after Jotham’s discharge was issued, the authorities at LASUTH asked my wife to go back to the State Secretariat at Alausa, Ikeja to get a clearance from the State Government that it will pay the balance.
At Alausa, she was told that the state is broke and that we should go and pay half the cost before our son can be released from hospital. As it stands, we can’t settle the bills for now and Jotham can’t go home. This development has prevented us from continuing with his treatment for we are told that he cannot attend clinic as an inmate-only out patients can be attended to at the Out Patient Department (Clinic).
Jotham is a 14-year-old SS2 student and was preparing to write his Senior School Certificate Examination before he took ill. The youngster is emotionally drained and sometimes suffers emotional breakdown and cries. As his father, I would do my best to give my eldest son all the support that a loving father would give his son; sick or healthy.
I want to use this opportunity to appeal to the Governor of Lagos State, His Excellency, Governor Akinwumi Ambode, the peoples’ governor to assist us take advantage of the state’s Free Health care programme.
His Class Teacher’s Remark on his Report Sheet reads: “He is a Promising Boy.”
Anthony Edgar-Oluwa Ororho is Jotham’s father.
I sincerely pray he sees and help him
Related Topics:
Up Next