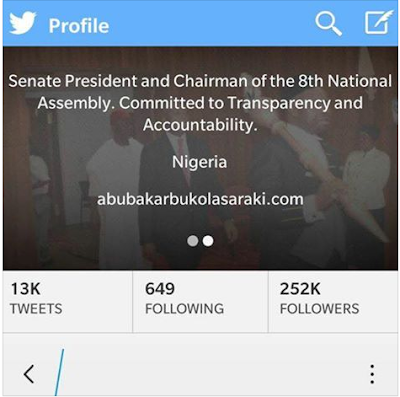 Nigerian users on Twitter, on Saturday, expressed surprise at the removal of the All Progressives Congress’ name from the official profile page of the Senate President, Dr. Bukola Saraki.

According to some users, the Senate President’s verified Twitter biography previously read, in part, “Member of the APC.”

The page, it simply read, “Senate President and Chairman of the 8th National Assembly. Committed to Transparency and Accountability.”

One user, Am Human No Labels, said, “Sir, are you no longer a member of the ruling party? I can’t find APC on your bio anymore.”

In the same vein, @olufemisp wrote, “I knew it was when @bukolasaraki deleted the “APC” that proudly adorned his bio. This Saraki war will consume the party.”

Another user, AS Aruwa, said, “I just noticed that @bukolasaraki has deleted ‘Member of the APC’ from his bio. Someone is about to decamp?”

Maryam Abubakar also asked, “Now that the ‘APC’ on Bukola Saraki’s Twitter bio is gone, what should we expect?”

“Why is the APC on your bio gone sir?” @RichieDectector asked, while Ayokunle Odekunle wrote, “@BukolaSaraki removes the ‘APC’ from his bio. It gets more interesting.”

Afolabi Ajiboro also said, “@ogundamisi have you noticed that @bukolasaraki has removed APC from his bio on Twitter? Minutes later the PDP released statement defending him.” The Senate President did not respond to the controversy on Twitter.

However, the Special Adviser to the Senate President on Media, Mr. Yusuph Olaniyonu, said, “It is not a new development. The party logo was there during the elections and we took it off after the elections about a month ago.”