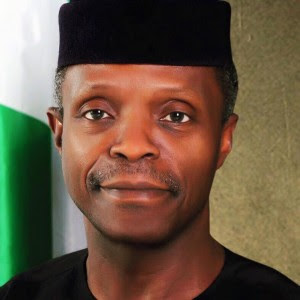 The Vice-President, Prof. Yemi Osinbajo, said on Saturday that the present level of poverty and underdevelopment in the Northern parts of the country should not be allowed to define the future of the region.
Osinbajo gave the advice in his address to the summit organized by the Northern Re-Awakening Forun (NRF),tagged:“Building a Safe,
Secure and Economically Inclusive Northern Nigeria’’.
Although Osinbajo expressed worry that the poverty level in the 19 Northern sates was high he, however, called on the people to evolve strategies to stem the tide.

“`The Northern states occupying about 70 per cent of the land mass of the country have the highest infant and maternal mortality rate as well as the lowest rate of child enrollment in schools.
“They have the highest number of unemployed young people, and of course faces the challenge of inter-ethnic and inter-religious conflicts including the Boko Haram terrorism.’’

According to Osinbajo, the National Bureau of Statistics 2015 figures show that the poorest 10 states in Nigeria are in the North with the exception of Ebonyi state.
He, however, noted that dismal as some of the conditions and statistics might be, “it should not define our future or that of our children. ”

“We can point to the past to draw some inspiration from the lives of some of those who gave all to ensure that the vast majority of our people do not remain in want and poverty.
“History reminds us of the visionary leaders in Nigeria, who fired our imagination through their vision, diligence and selfless service.
“Sir Ahmadu Bello, Sardauna of Sokoto, Sir Abubakar Tafawa Balewa, Malam Aminu Kano, J. S. Tarka, and countless others who clearly understood the varied issues afflicting the region, thought over them thoroughly, laid out plans and worked selflessly to realize them.’’

He said the new crop of leaders should note that their past leaders did not live or fight to enrich themselves, but rather they lived to enrich the lives of the people.
“They did not leave vast personal estates behind, but their names and legacies live in the hearts of the people.’’
Osinbajo said he was convinced that if there was the will to think thoroughly through our challenges with clarity and sincerity of purpose the glory of the latter days would surely be greater than the former.
The VP said the Federal Government was committed to action on all issues that affect the lives of Nigerians in any part of the country.
Related Topics:
Up Next