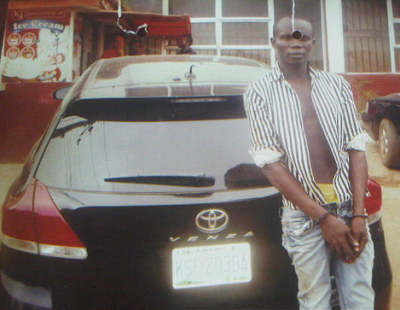 Pictured above is Somadina Enyiobi,26, has been jailed for two years without an option of fine after he confessed that he specialised in snatching SUVs in Lagos State, western Nigeria.

Oraifite, Anambra State-born Enyiobi was arrested and charged before Isolo Magistrates’ court with conspiracy and stealing.

Enyiobi’s journey to prison started after he went to Green Estate along Ago Palace Way in Okotoa and stole a Venza SUV parked in a compound.

The SUV with registration number KSF 203 DA belongs to Godwin Chukwudum who resides in the estate.

According to Enyiobi, he went there with two of his gang members he identified as Uchechukwu and Emmanuel and forced Chukwudum’s housegirl to bring the key of the SUV to them.

He said when she refused, they threatened to kill her and she eventually showed them where the key was kept.

He said they collected the key, tied the housegirl’s mouth, legs and mouth and locked her inside the flat and attempted to drive the SUV out of the estate.

However, luck ran out on him when he approached the security gate in the estate and the security guards who knew the owner of the SUV asked him where he was going with the SUV.

When he was unable to give a satisfactory answer, the owner who had gone to work was immediately contacted and he came and arrested Enyiobi, while his two gang members escaped.

He was handed over to the police at Ago Palace division who charged him to court, while his gang members who escaped are still at large.

The prosecutor, Inspector Aboyomi Abass, urged the court to jail Enyiobi to serve as a deterrent to others eventhough he did not waste the time of the court by pleading guilty.

Oh No! See What Rapists, Paedophiles Did In Enugu State (Photos)

How PREMIUM TIMES Editor Was Arrested By SSS (Pictured)