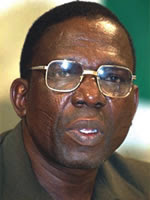 Adegboye Onigbinde,a former Nigeria coach,  insists Sunday Oliseh’s lack of managerial experience as Super Eagles coach resulted in the face off the manager had with erstwhile team captain Vincent Enyeama on Tuesday in Belgium.
Oliseh had replaced the Lille goalkeeper with Ahmed Musa as captain on Tuesday following Enyeama’s late arrival for camping in Belgium ahead of the friendlies against DR Congo and Cameroon.
Enyeama had missed the Monday’s deadline after attending his mother’s funeral on Saturday in his home town.
Onigbinde commended Oliseh for his decision but warned that his poor managerial skill could tear the team apart.

“I commend Sunday Oliseh for the step he has taken. Such acts of indiscipline did not just start in the team. A recent example was Enyeama’s comments on the choice of Kaduna for the Super Eagles match against Chad. It was not his duty to decide which venue the team should play, that’s for the Nigeria Football Federation,” the former CAF instructor said.
“By that time, I condemned Enyeama’s position. We cannot allow one or two players to hold the country to ransom. If Enyeama was my son, I would have spanked him seriously for the many wrongs he has done. They’ve pampered him too much.”
Onigbinde said Oliseh’s decision to embarrass Enyeama before his teammates might breed intimidation and fear in the team.
“Oliseh lacked experience in managing the situation. When he was going to be employed by the NFF, I called people’s attention to his lack of experience. His handling of the situation shows he lacks the experience to manage the players,” Onigbinde said.