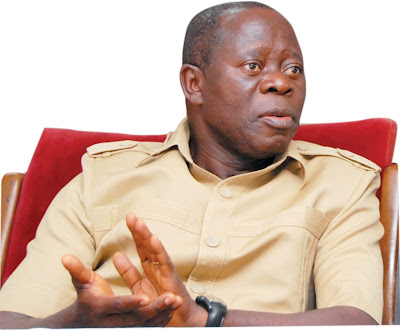 Governor, Mr. Adams Oshiomhole of Edo State, on Tuesday said he was not surprised by the current travails of a former Minister of Petroleum Resources, Mrs. Diezani Alison-Madueke, in the United Kingdom given that the nation’s economy had been badly managed over the years.

Oshiomhole said no average Nigerian fared better under the ex-President Goodluck Jonathan’s administration despite the media hype over a reported rebasing of the economy.

The Edo governor spoke with State House correspondents after meeting with President Muhammadu Buhari at the Presidential Villa, Abuja.
He said,

“For me, I don’t think anybody should be surprised (about Alison-Madueke’s trial in the UK) because even the most favourable commentator on the Nigerian condition, the economy, the polity and the society, agrees that our economy was badly mismanaged over the years. I have not seen one commentator that disagrees.
“Even when they talk about rebasing, and so what? Have you rebased the level of poverty? Have you rebased prosperity? Have you rebased unemployment? Have you rebased homelessness? Have you rebased hunger?
“So, I have not seen anyone that says Nigerian people are doing better. This was never my issue. I was only a spokesman for the National Economic Council.
“But in this country, when you speak out, all the arrows would be fashioned to attack you. But one of the things I learnt in life at the age of 17 when I got into the leadership of labour is that the truth does not require supporters’ club. It can stand on its feet any day. You can hit it. You can kick it. You can bomb it, but you can’t destroy it.”
Oshiomhole said the truth had been that a lot of money was stolen under Jonathan’s watch.
He said the ongoing travails of Alison-Madueke could only be described as a tip of the iceberg.
The governor said, “The truth is that a lot of money was stolen and what you are seeing is just a tip of the iceberg because when you imagine what accrued to Nigeria consistently from $140 (per barrel) averaging $108 over a long period of time and yet your treasury is empty and you were running a budget deficit.
“You were devoting 85 per cent of your budget for four consecutive years to recurrent; you were borrowing and you drew the entire pensions fund.
“Yesterday, I saw a lot of analysis of how pension fund should be invested on infrastructure.
“You challenge PenCom and the Ministry of Finance, you will discover that over N3.5tn was drawn down by the previous government from the pension fund to support recurrent expenditure, not to support infrastructure.
“I wonder why you want to hear it from me because some of the issues we parrot flow from what we have read from your electronic media and print media arising from what you have observed.
“There have been probes, there have been revelations where whistleblowers have been removed from office, and they became guilty for speaking out.
“I believe that time will tell how much was taken and who was involved. I think what you are hearing now is like appetiser. It is sickening. It used to come from America, now it’s from Britain.”
When asked if the Federal Government had a hand in the former minister’s ordeal, Oshiomhole said, “It is not about who has a hand in what. I think it’s about law and order. In other climes, institutions do their work. They are not at the beck and call of the political authority. They have their mandate and the law specifies this and it is scrupulously followed.”

He said he was the happiest person concerning the current developments because he had been in government for seven years without being in power.
He said his happiness was not because of personal benefit alone but also because of the changes he was seeing.
He said,

“I am the happiest person because I have been in government for seven years without being in power. I was in government; I could not call a commissioner of police and talk as a chief security officer.
“I was haunted by all manners of persons. You kill a snake in Edo, they will put the snake on life support in Abuja and they keep harassing us.
“Now, all that venom is dead and buried. For the first time, I am excited and happy not just for personal benefit but for the changes I am beginning to see.
“They have not started scrutinising, just blocking the holes; it’s no longer flowing like before and so the propensity to indulge in those conspicuous habit already curbing themselves.
“People are regaining sanity, human rationality is returning and the idle class that makes money without office or business address, whose only address is an iPad and cell phone with appropriate phone numbers is lamenting and not sure of tomorrow.”

Whoah; Kourtney Kardashian Is This You???

My Ministerial Nomination Came As A Surprise – Fayemi