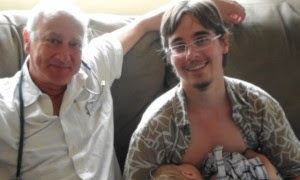 Trevor MacDonald is a self identified female-to-male transgender gay man, who’s given birth to two children since he transitioned. He’s expecting another baby in April.
MacDonald explains he was born female but transitioned to male by taking hormones and having chest surgery.

“When my partner and I decided to start a family, we got advice from my doctors and I stopped taking my testosterone. Because my surgery removed most of my breast tissue, I don’t know how much I’ll be able to breastfeed, but I really want to try.”

He’s accused the midwifery community of “transphobia” in The Huffington Post. MacDonald argues that suggesting that trans guys who give birth are not men, but actually women, because of their biology, is “highly offensive to trans individuals because it denies our gender.”

Some midwife organizations have already begun to remove offensive references that suggest that mothers are women, moving to instead call them “pregnant people” and “birthing individuals.”

However, in a sign that all may not be lost in our culture, some midwifes, mothers and experts are pushing back.

In 2014, with little consultation, Midwives Alliance of North America (MANA) decided that being a woman was not a necessary or relevant factor for being a mother. They edited their core competencies document, and in effect ordered practitioners to stop referring to clients as “women” and “mothers” demanding they say “pregnant people” and “birthing individuals” instead.

The change did not go unnoticed. At the end of last month a group calling themselves “Woman-Centred Midwifery” (WCM) published an open letter addressed to MANA, signed by hundreds of respected Midwifery experts including the revered “mother of authentic midwifery” Ina May Gaskin.

They wrote, very politely, that: “MANA’s attempts at inclusivity are commendable in today’s complex world. We are concerned, however, by accelerating trends in our culture to deny material biological reality and further disconnect ourselves from nature and the body.”

Referring to the edited core competencies document, they protested that, “women are now all but missing from the language, as if we can separate woman from mother from baby.”

MacDonald feels that, “the signatures [on the WCM letter] of midwives held in high esteem in the birthing community are especially hurtful,” and argues that, “trans, genderqueer and intersex people have been giving birth for as long as women-identified people have and we have also encountered oppression.”

However, far from suffering from some “phobia” or irrational fear, WCM explain their quite rational reservations in the letter.

“We know a midwives that biological sex occurs at the level of our DNA and the gametes we produce, and s immutable,” they write.
They acknowledge that “gender is cultural and gender norms vary across the globe,” but state that, “Sex is natural, biological and objectively factual,” and “Human beings, like the majority of other mammals, are sexually dimorphic. i.e. there are two distinct biological sexes.”

“by embracing the idea that any human other than those in a class called women carry offspring to term, give birth to them and nurse them, we are prioritizing gender identity over biological reality,” and that, “We are allowing gender identity to be the primary way that we refer to one another, even for a biological process like birth.”

Flavor’s Baby Mama,Anna Ebiere And Daughter Step Out For A Walk In New York (See Photos)