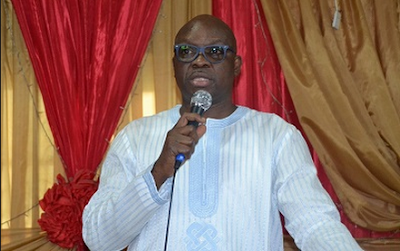 Mr Ayodele Fayose, the Ekiti State Governor, has manipulated the All Progressive Congress led Federal Government in the death of former Bayelsa State Governor, Senator Diepreye Alamieyeseigha.
Describing the death as painful and unfortunate, Fayose said, the All Progressives Congress (APC) led Federal Government finally succeeded in hounding an Ijaw leader to death just because of his staunch stance on the upcoming Bayelsa State governorship election.”

Fayose, in a statement by his Special Assistant on Public Communications and New Media, Lere Olayinka said, the governor commiserated with the deceased family, former President, Dr Goodluck Jonathan as well as the Governor of Bayelsa State, Hon Seriake Dickson and the entire people of the State.

The governor, who prayed for the repose of the soul of the late former Governor-General of the Ijaw Nation, said his death was “an eclipse of a political figure, who despite all political odds, still commanded great respect from his people.”

“Even though I am not against anti-corruption fight, it is painful that in the present day Nigeria, political vendetta is being allowed to override the sovereignty of the country, such that the Presidency was eager to release, a citizen of Nigeria that had been tried, convicted and later pardoned in accordance with the laws of the country.

“Having been tried and convicted eight years ago, served his sentence and forfeited properties to the Bayelsa State Government; methinks Alamieyeseigha should have been allowed to live his life without unnecessary political intimidation and harassment.

“I have consistently asked them why they have closed their eyes to the corruption allegations against their own people. Why is their attention only on people from the Southern part of Nigeria? And now that Alamieyeseigha has been hounded and harassed to death, what else can the apostles of political vendetta do?

“My prayer is that God in His infinite mercies will console the entire Alamieyeseigha’s family and the people of Bayelsa State, especially members of our great party, the PDP and also grant them the fortitude to bear this sad and painful loss.”

Kylie’s Boo Tyga Gets $25,000 To Feature on Next Keeping Up With the Kardashian

Wow! New Photos Of This Instagram Model Has Got Everyone Talking (Photos)