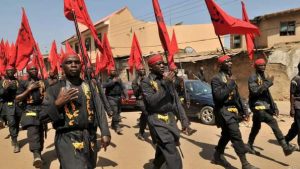 The Islamic Movement in Nigeria, IMN, has accused the Federal Government of resorting to delay tactics in the prosecution of the remaining cases involving its members including the one trying the leader of the organization’s leader, Sheikh Ibraheem Zakzaky.

It said the government was deliberately frustrating its legal team led by Mr Femi Falana, SAN and Mr Maxwell Kyon, who have so far successfully defended and won all the cases against the government.

IMN, also known as Shiites, said the government has adopted this method because it has not been able to win a case against its members in court.

In a statement to DAILY POST, Wednesday signed by Ibrahim Musa, its President, Media Forum, the IMN said, “Today, exactly a week ago the Kaduna State High Court presided by Justice Nyoms discharged and acquitted 9 members of the Islamic Movement in Nigeria arrested precisely three years ago while on their way to attend the Islamic religious rite of Ashura mourning in Kaduna.

“All the nine, including two women, stood trial in the Kaduna State High Court since September 2016. They were accused of being members of the Islamic Movement, unlawful assembly and intent to disturb the public among others.