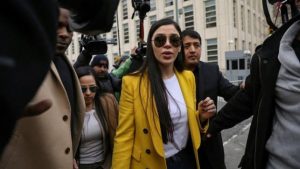 In a statement released on Monday, the US justice department said that Coronel, 31 – who is a joint US-Mexican citizen – was arrested at Dulles international airport and was scheduled to make her initial appearance in federal court on Tuesday via video conference.

According to court documents, Coronel is charged with conspiring to distribute cocaine, methamphetamine, heroin and marijuana for importation into the US.

She has also been charged with allegedly conspiring to help arrange Guzmán’s spectacular escape through a mile-long tunnel from the high-security Altiplano prison in Mexico in July 2015.

Court papers allege that Coronel worked with Guzmán’s sons to organize the escape plot, which included buying a plot of land near the prison, firearms and an armored truck and smuggling the imprisoned cartel chief a GPS watch to ensure the escape tunnel reached his cell.

“After Guzmán was re-arrested in Mexico in January 2016, Coronel Aispuro is alleged to have engaged in planning yet another prison escape with others prior to Guzmán’s extradition to the US in January 2017,”

Guzmán was sentenced to life plus 30 years at his trial in New York in 2019.

Throughout the trial, Coronel attended court every day, even when evidence included text messages between her husband and one of his mistresses.

Before her husband’s sentencing, she told a sympathetic TV interviewer that Guzmán was a “humble” man and complained that the media had made El Chapo “too famous”.

Her arrest is likely to further complicate relations between the administrations of Joe Biden and his Mexican counterpart Andrés Manuel López Obrador, and comes as security cooperation between Mexico and the United States appears to have cooled.

Emma Coronel was born in Santa Clara, California and is the daughter of Ines Coronel Barreras, a medium-ranking lieutenant in the Sinaloa cartel.