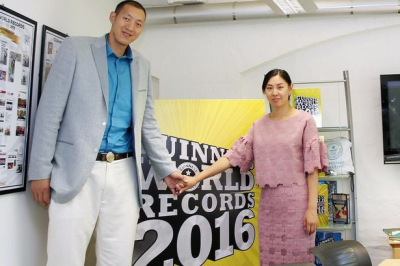 A husband and wife have secured a place on the Guinness World Records after being named the world’s tallest married couple
Meet the tallest couple in the world – who together have a combined height on 13 feet and 10.72 inches (that’s over 4.2 metres).
Sun Ming and Xu Yan, from Beijing, have secured the 2016 Guinness World Record as the world’s tallest married couple, beating the previous record holders by just 4.37 cm. 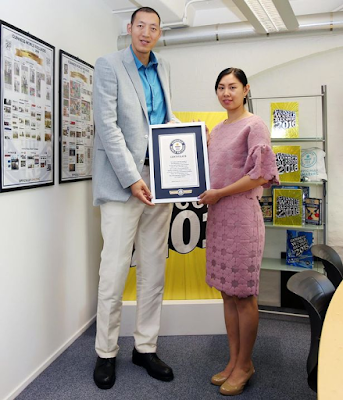 Unbelievably, Sun Ming measures up at a whopping 7’8.9″ while his wife stands at 6’1.7″.The pair have admitted that everyday tasks such as travelling by car or plane can be difficult but both Sun and Xu are used to their daily struggle.
The couple, who are both athletes (Sun is a basketball player and Xu plays handball) met at the National Games in China in 2009 and tied the knot in Beijing in 2013.
Speaking to press at the Guinness World Records presentation, Sun said: “In China, it’s a different country and a different culture.
“In China, you know, if you’re tall, if you were to marry someone like five feet tall, my mum and my father would say, ‘no, you can not do that. You must find a taller girl who you’ll marry’.”
Xu said: “I had hoped to marry someone taller than me in the past.
Related Topics:
Up Next

We Are Ready To Hand Over Power To Younger Generation – PDP