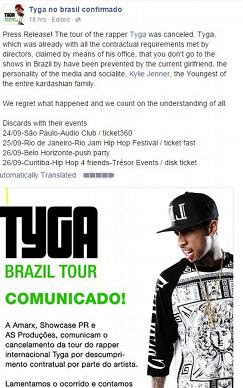 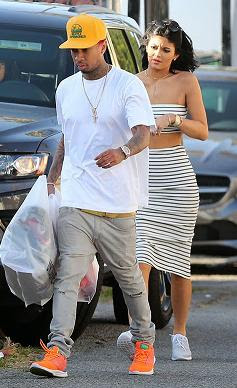 Bootie power! Who would have thought that small 18 year old reality star has such power over her much older man. Tyga has cancelled his much publicized tour set to start tomorrow in Sao Paulo on Kylie’s wishes – and fans say it is because she is worried about him taking a liking to bootylicious locals.

Tyga was due to play three eagerly awaited gigs in the tropical country this week, but according to reports in Brazil, Tyga is facing a $400,000 fine for breaching the contract with fans labeling him a puppy rather than a Tyga and others claiming that Kylie wears the pant in their relationship.

In a statement, the furious local organizers of the tour said Tyga’s reps had informed them ‘he would not be coming to Brazil for his shows because he was stopped by his current girlfriend, media personality and socialite Kylie Jenner.’

‘We are very upset in finding out an artist lacks the professionalism and the love for Brazilian fans, and allows something personal to interfere with his work schedule,’ added Alexandre Stocco, of AS Productions, and Andre Marques, of Amarx Productions.

Stocco said they were informed of the change in plans earlier this week.

So, The £50 Million Yacht Beyonce And Jay Z Used For Holiday, Is Owned By A Nigerian – See Who & Photos