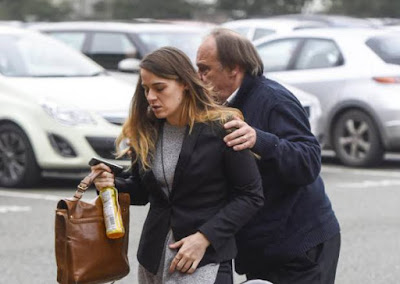 A woman has been accused of pretending to be a man by tying her chest with bandages and covering her hair with a woolly hat.

Gayle Newland, 25, is alleged to have befriended her victim on Facebook, saying that she was a man called Kai Fortune.

Eventually the pair agreed to meet up at a hotel for Sex on the condition that the victim was blindfolded at all times, Chester Crown Court has heard.

It was also alleged that the victim was told she couldn’t touch Kai’s Pen*s but believed she was having Sex with a male. Newland is now on trial for five counts of assault by penetration.

Newland wore a swimming costume and bandages which she said was necessary as a result of being involved in a car crash. She also used this excuse to get her victim to wear a blindfold by saying she was self-conscious about her appearance.

She also wore a prosthetic Pen*s and told her victim that her voice was high pitched because of her Filipino heritage.

The alleged victim told police: ‘I know it sounds pathetic, but I was just so happy at the time because I was in love with this person and we’d built this beautiful relationship.

‘It was just based on, you know, our minds and all the other things that we had in common so I just felt grateful that I’d finally got a proper relationship.’

Prosecutors said the same sequence of events happened a number of times, once at a Travelodge in Chester and then at the victim’s home. Newland was rumbled , after sex, the alleged victim took off her blindfold.

She was later caught by police but told officers that they had been living a ‘fantasy’ alleging that the victim knew the truth all along.