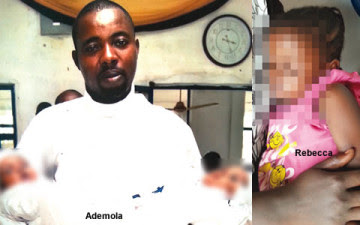 This is a very heartbreaking news that a four-year-old Rebecca (not real name) was a normal baby when she was born. She was bubbling with life, but following several sexual assaults on her by her 37-year-old father, identified as Ademola, little Rebecca has lost her voice. She has not been able to talk for the past few weeks.

She looked forlornly and occasionally fell asleep in the arms of her mother, Folake, 32, who was visibly distressed as she how her husband of 14 years had been molesting their daughter.

Blessed with four children; three girls, including a set of twins, and a boy, she reminisced about how they used to live as one (happy) family in the Igando area of Lagos before things took a grim turn and she caught her husband committing one of the most gruesome crimes against their second daughter – sexual assault.

She noted that apart from having sexual intercourse with the little girl on several occasions, she had caught her husband inserting his finger into her private part more than once, all of which had traumatized Rebecca and made her a shadow of her real self.

The unfortunate incident seems to be tearing the family further apart as she has not only moved out of the house; she has vowed never to return, whilst accusing her husband of being diabolical.

She began, “It started in 2013 when I suddenly woke up one night and saw my husband removing the panties of my daughter. It was in the midnight. I wanted to shout but I wanted to see what he was up to. So, I pretended as if I didn’t see him because the room was relatively dark.

“When he pulled down her pant, he looked around and when he felt convinced that everyone was deep asleep, he stood up and moved to where the girl was and dipped his hand in her private part. I screamed.

“To say I was shocked was to say the least. He was shocked too because he didn’t know anyone was watching, so he quickly stood up, pulled up his trousers and started beating me.”

According to Folake, the experience she had that night was enough for her to leave his house, but she said she had to stay because she was already pregnant for him at the time.

She continued, “He beat me that night such that blood came out of my body. I didn’t even know I was pregnant until that night and the pregnancy was about two months old. I ran away from him for some time and I told my relatives. But I had to go back because of the pregnancy and that was when I had a set of twins for him.”

To Folake, her husband had turned a new leaf and would never do such a despicable act again, but unknown to her, other things had been going on without her knowledge. She said the straw that broke the camel’s back happened on July 17, 2015 when she caught him molesting her daughter again the same way he did before.

With her eyes soaked in tears, she said, “I thought he had stopped until the night of July 17, 2015 around 1am. It was a Friday. Rebecca was sleeping beside me but I saw him stand up, he carried the girl to the other side of the bed. He didn’t know I was awake. I had wanted to shout but I wanted to know what he was up to again. So, he removed his trousers, turned his back at me and crawled to where Rebecca was lying.

“He didn’t know I was looking at him. He pulled down her panties and started inserting his finger in her private part again. I thought I was dreaming. I screamed and continued shouting. He was shocked and couldn’t talk. He was just looking. Then, he went back to sleep.

“The following morning, I challenged him why he was doing that to his own child. I know he is diabolical, so I told him if his plan was to use my daughter for anything evil, he would not prosper. That was what got him angry and he started beating me. He said he would kill me. Then, my other children started crying and shouting, and he didn’t stop until one of our neighbours intervened.
“The following day, I went to the church to report to the shepherd of the church he was attending, Celestial Church of Christ, somewhere around Ikotun in Alimosho Local Government. The shepherd was shocked too but he pleaded with me to exercise patience. Because of the fear of what he could do to us, we left the house and moved to the church and we kept sleeping there.”

Folake explained that her estranged husband, who is a motor mechanic in Ikotun area, came to the church, beat her and forcefully took away their 17-month-old twins, whom she was still breastfeeding, noting that the two girls had been in his custody since then.

Her seven-year-old boy, identified simply as Seun, who appeared sharp-minded, told our correspondent that he used to see his father on top of his sister, maintaining that he had caught him twice in the act of putting his hand “under” his sister. He explained that his father used to rub his hands all over Rebecca’s body but he barely knew what he was up to.

Disturbed by the incident, Folake said she reported the assault at the Igando Police Station and to the Executive Director, Esther Child Rights Foundation, Mrs. Esther Ogwu, who had helped to monitor the case with the police. Folake added that some of the policemen in the station even laughed at her when they heard about the case.

She added, “We have involved the National Human Rights Commission, Office of the Public Defender and the Lagos State Ministry of Justice in the case so as to ensure justice. It is increasingly becoming important for parents to pay due attention to their children to guard them against assault.”

Even though a test conducted on the girl at the Mirabel Sexual Assault Referral Centre at the Lagos State University Teaching Hospital, Ikeja, Lagos, confirmed that the girl had been assaulted and her hymen broken, Folake noted that to her dismay, Ademola had been released on bail by the police, and that the police in Igando had been foot-dragging in taking the case to court.

Recounting how bad she had been battered and assaulted by the husband, Folake noted that her worry was that the man who had done both spiritual and psychological damage to her little daughter should was about to go scot free.

“This girl’s private part has almost become rotten and as young as she is, her breast is already coming out, and she limps occasionally. I can never entrust my children into his hands and that is why I’m worried about the twins that are with him. They are also girls. I don’t want him to molest them too.
“He had afflicted us with charm but we have been set free. The two children in school have been very retarded, coupled with the fact that Rebecca has not been talking until she did twice just two months ago. And since then, she has stopped again. She just doesn’t talk and she urinates frequently. She should be in Nursery One now but she seems not to be coping. Even her teachers are complaining she had become a recluse and she keeps urinating all the time.”

Ademola denied the allegations leveled against him by his wife and son, saying, his wife was looking for ways to move out of his house, thus, she had to “cook up lies against him.”

He added, “She is lying against me. I didn’t do any of those things they were saying. She has seen someone else she wants to marry and that was why she left the house.”

The Divisional Police Officer, Igando Police Station, Mr. Segun Fagbohun said that he had transferred Ademola and the case to the State Criminal Investigation Department at Yaba for further investigation.

culled from punch
Related Topics:
Up Next

LOL! Checkout Photo Of 50 Cents When He Had Not Seen Any Evil