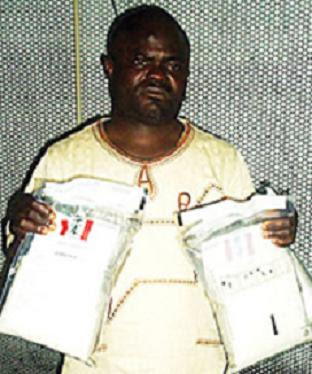 Operatives of the National Drug Law Enforcement Agency at the Murtala Mohammed International Airport Lagos have arrested a South African-based Nigerian, Ayoola Adebayo, with 3.920kg of substances found to be methamphetamine. Ayoola was arrested during the outward screening of passengers on an Ethiopian airline flight to South Africa.

A statement by the agency’s spokesperson, Mr. Mitchell Ofoyeju, on Friday stated that the drug was concealed in false bottom of the two bags the suspect wanted to check-in at the departure hall of the airport.

The suspect, who is married with two children and holds a Higher National Diploma in Estate Management from Osun State College of Technology in 2006, said he made a mistake getting involved in drug trafficking, saying he never knew he could be caught.

“I sell food and small household goods in Pretoria and I have lived in South Africa for over three years. My friend in Pretoria asked me to bring the two bags to him. He bought my return ticket and gave me N150,000.

I thought the drug would not be detected because it was neatly concealed. This is a big mistake on my part because I have sustained my family with the grocery business. It will not happen again if I can get out of this problem,” he said

NDLEA commander at the airport, Mr. Ahmadu Garba, said the case was being investigated