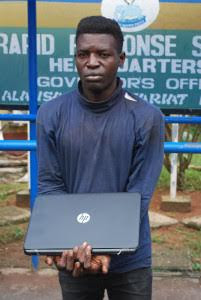 after he was caught robbing motorists of their valuable items including phones, laptops and others along the Surlere axis of the state on September 24th. When interrogated, Michael blamed his addiction to alcoholic drinks for his involvement in robbery

According to Leadership Newspaper, Michael said;

“It is true that I damaged the windscreen and side glass of his car and stole his handset and laptop. I didn’t do it ordinarily. It was because I just took some bottles of alcoholic drinks and liquor. I beg for forgiveness. Devil put me into the act”.

He has been transferred to the Special Anti Robbery Squad of the state police command for further investigation .