According to a statement by Wilson Uwujaren, EFCC spokesman, at the sitting at the federal capital territory (FCT) high court on Thursday, Ahmed, the chief prosecuting officer, told the court that EFCC investigations showed Idris diverted TSA, GIFMIS and IPPIS funds.

The witness also told the court that the funds allegedly diverted by the suspended accountant-general were linked to properties such as the Gezawa Exchange Limited, Gezawa Integrated Farms, and Kano City Mall.

“We had cause to invite several individuals who had transactions with the Gezawa Commodity and Exchange Limited and found one Baita Ibrahim Kura, of BI Kura Ibrahim, a Bureau de Change operator based in Kano,” Ahmed was quoted as saying.

“We invited him and cautioned him and he voluntarily wrote a statement, claiming he made several payments like N208 million into Gezawa Commodity Market with Jaiz bank.”

Ahmed also told the court that Ibrahim admitted to have paid the sum of N866 million to one Mustapha Mukhtar of Marsc Construction Limited for the construction of Gezawa Commodity Market and Exchange limited.

“My Lord, investigation showed that, Ibrahim received United States dollars from the first defendant. We also found out that agitation from the nine oil-producing states, regarding derivation from the excess crude account, was tabled before the Federal Account Allocation Committee (FAAC) and the committee came up with a figure of about $2.2 billion as what was due to the nine oil producing states, and these amount was to be deducted over a 60 months period on quarterly basis,” the investigating officer said.

The EFCC witness also told the court that 11.5 percent of the figure, amounting to N44.7 billion, was used to pay some public officials to facilitate payments to oil-producing states.

“After the determination of this committee, my lord, some companies, Akindele and Co, a company owned by the second defendant, Godfrey Olusegun Akindele, was presented under the guise of consultancy,” Ahmed said.

“My lord, until recently, the second defendant, Akindele, was a staff in the office of the AGF, and technical assistant to the first defendant. Investigation revealed that N84.39 billion was paid into Akindele’s bank accounts.”

The EFCC officer said another N21 billion was paid into Akindele’s account in February 2021, adding that other payments were made in 2021, amounting to N94.39 billion.

Ahmed told the court that funds were shared to some groups and individuals, including one Peace Akomas of the Revenue Mobilisation Allocation and Fiscal Commission (RMAFC), who was said to have collected N18.8 billion.

“The second group is the AGF group and it got a total sum of N18.01 billion,” Ahmed said.

“The third group, the Commissioners of Finance in the nine oil-producing states, received N21.4 billion. The money was withdrawn by Akindele, converted to US dollars and handed over to Akomas on behalf of the group.

“The fourth group is called the Yari group. This group received N17.15 billion. The entirety of the sum was transferred to the account of Fimex Professional Services on the instruction of the representative of this group: Abdulaziz Yari, former Zamfara state governor.

“The remaining N8.9 billion was retained by the second defendant. Furthermore, N4.29 billion was converted to US dollars by Akindele as appreciation for the consultancy contract, and the balance of N4.6 billion was given to Akindele.”

The EFCC officer added that the properties purchased with the funds by the first and third defendants were traced to various locations in Abuja, Kano, and Niger states.

US Bishop, Lamor Whitehead, who was robbed during service charged for stealing member’s $90,000 life savings 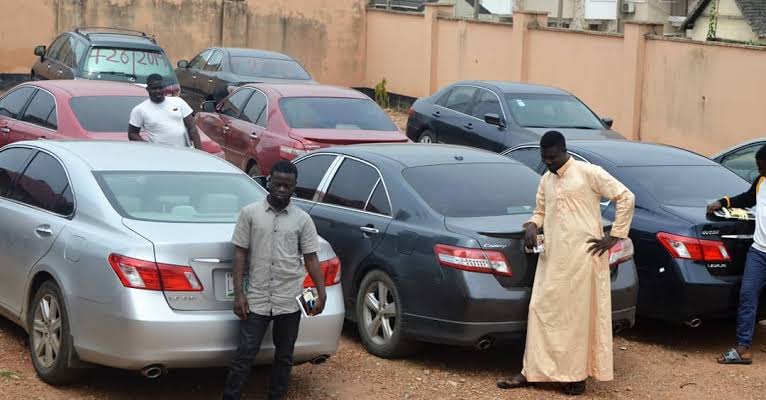 This is contained in a statement signed by its spokesperson, Wilson Uwujaren and made available to newsmen on Thursday in Ibadan.

The News Agency of Nigeria(NAN) reports that among those arrested were two siblings alongside 24 others.

He said that the suspects were arrested on Tuesday at the Apete area of Ibadan, based on actionable intelligence worked upon by the commission.

He said that the suspects would be charged to court as soon as investigations were concluded.

The anti-graft agency, in a statement on Tuesday, said she was arraigned on a four-count charge before a federal high court in Ilorin, the Kwara capital.

Oyawoye, said to be a staff of the Kwara state ministry of finance, is accused of collecting various sums of money from 23 members of the Christ Apostolic Church in Offa, Kwara state, with the promise to get them jobs in federal and state parastatals.

“That you, Oyawoye R. Olajumoke Fafemi, between the month of April and September 2019, in Ilorin, within the jurisdiction of this Honorable Court, with intent to defraud, obtained the gross sum of N2,000,000.00 (Two Million Naria Only) from one Moronfoye Solomon Daramola under the pretence that you will secure government employment for his church members; a representation you knew to be false and thereby committed an offence contrary to Section 1 (1) (a) of the Advance Fee Fraud and other Fraud Related Offences Act, 2006 and punishable under Section 1 (3) of the same Act,” one of the count reads.

The suspect is also accused of collecting the sum of N700,000 from one Adeoti Kamoru under the guise of helping him to secure a visa for hajj pilgrimage in 2019.

According to the EFCC, during the proceeding, the defendant pleaded not guilty to the charges.

The EFCC said at the court session on Tuesday, Andrew Akoja, counsel to tthe agency, urged the court to give a trial date to enable the prosecution prove its case.

Based on the plea, A.T. Yusuf, the defence counsel, prayed the court to grant his client bail pending the hearing and determination of the case.

Muhammed Sanni, the judge, granted the application as prayed.

Consequently, Oyawoye was granted bail in sum of N2 million and two sureties with an order to deposit two of her passport photographs with the court.

The case has been adjourned till November 17 for commencement of trial.

Dethroned Lagos traditional ruler, Mutiu Ogundare, sentenced to 15 years in prison for faking his own kidnap A Lagos high court has sentenced Mutiu Ogundare, dethroned Baale of Shangisha in Magodo area of Lagos state, to 15 years’ imprisonment for faking his own abduction.

The sentence was handed down by Hakeem Oshodi, the judge, on Tuesday.

Olarewaju Ajanaku, the defence counsel, in his allocutus on June 15, asked the court to temper justice with mercy.

Ajanaku told the court that the convict had turned a new leaf and that he did not think through his actions when he committed the offence.

However, Jubril Kareem, the state prosecutor, asked the court to apply the provisions of law to sentence the convict.

The prosecution said Ogundare put himself forward to be kidnapped for the purpose of causing a breach of public peace, adding that his brother and wife aided him in the crime.

Ogundare and Opeyemi Mohammed, his brother, were convicted on three counts bordering on conspiracy and fake abduction.

The court, however, discharged and acquitted Ogundare’s wife.

“I have considered the allocutus of the defence counsels. However, it is in the view of this court that the defendants showed no remorse during the trial,” Oshodi said.

“In fact, the first defendant tried to buy his way out of the court. A lesson has to be thought to serve as a deterrent to others.

“The sentencing shall run concurrently from the day they had been arrested.”

The said kidnap took place on July 5, 2017, but Ogundare later confessed to security services that he staged the kidnap to blackmail the state government.

In the same month, Akinwunmi Ambode, former governor of Lagos, ordered the removal of Ogundare as the baale of Shangisha.