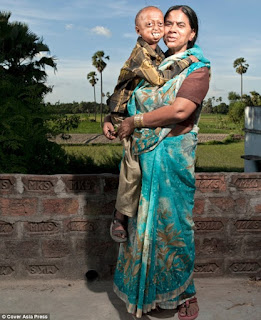 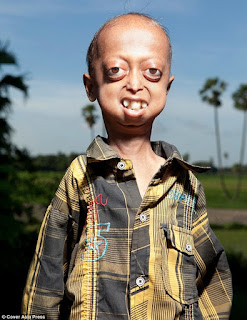 Meet this 14-year-old boy has been left with the body of a 110-year-old in India because he has a rare disease which makes him age eight times faster than normal.
Ali Hussain has seen five of his siblings die from the same condition called Progeria which is known to affect just 80 people worldwide.
Two of his brothers and three of his sisters have died from the disease in Bihar, the poorest state in India.

Ali’s parents Nabi Hussain Khan, 50, and Razia, 46, are first cousins and were the product of an arranged marriage 32 years ago. When they were 18 and 14 years old respectively.

Progeria causes rapid ageing and sufferers of the genetic disease are prone to arthritis, eye problems, heart disease and baldness.
Sufferers are not expected to live much beyond the age of 14 – but despite the grim prognosis Ali has refused to give up hope.

More
‘I very much want to live and I hope there is medicine for my condition out there. I’m not scared of death but my parents have suffered a lot,’ he said.

‘I’d love to live much longer for them. I don’t want to burden them with any more pain.’ 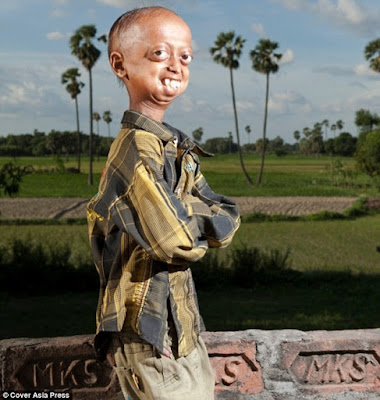 Their children Rehana, Iqramul, Gudiya and Rubina have all died from Progeria between the ages of 12 and 24.
A fifth child, a boy who died within 24 hours of being born, is also thought to have had the rare condition.
Nabia and Razia, who have had eight children in total, do have two healthy daughters – Sanjeeda, 20, who is married with two children of her own. Their youngest daughter Chanda, 10, also does not have Progeria.
When their first daughter, Rehana, was born in 1983 they had no idea anything was wrong at first. It was only after her second birthday when she couldn’t eat or walk properly did they visit a doctor.
But the doctor was baffled and he sent them home with some medicines. Progeria was so rare and poorly documented that most doctors had never heard of it. 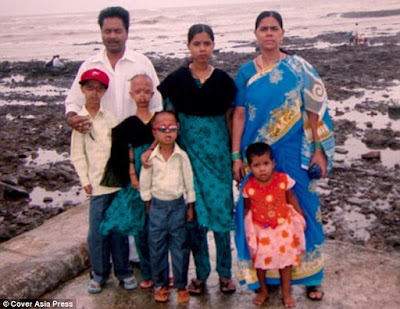 Sanjeeda is the one in red who is now 20 and married
Nabi Hussain Khan, 50, and his wife Razia, 46, have had eight children and six of them have suffered from Progeria.
Their first child was Rehana, a girl born in 1983 who died from Progeria in 2007 aged 24
Their second child Iqramul was born in 1987 and died in 2009, from Progeria aged 22
Progeria sufferer Gudiya, born in 1989, died in 2004 aged 15
Progeria sufferer Rubina, born in 1992 and died in 2004 aged 12
Sanjeeda, who is now 20, was born without the killer disease and is now married with two healthy children of her own
Progeria sufferer Ali was born in 1999 and is 14
The couple had an unnamed son who died within 24 hours of being born. They claim that he was also killer by Progeria
Their youngest daughter Chanda, aged 10 is also healthy