Nneoma Ukpabi, the actress, has reacted to her suspension as the Imo state chairman of the Actors Guild of Nigeria (AGN) over alleged fraud.

Emeka Rollas, the AGN national president, recently announced Ukpabi’s suspension after a lady identified as Favour accused the actress of defrauding her of N400,000.

In a video shared by Rollas, Favour claimed Ukpabi collected N400,000 from her with the promise to help her travel abroad.

The lady also said when she confronted Ukpabi to demand her money, the film star allegedly asked her boys to assault her.

At the time, Rollas had said the suspended chairman would be reinstated when she clears her name before the AGN national disciplinary committee.

But reacting in a video via her Instagram page, the actress dismissed the allegations. Ukpabi said Favour paid the said sum to an organisation she belongs to — and not her.

The actress said the organisation had announced a trip to Europe to which Favour indicated interest.

She claimed after paying the sum of N300,000, Favour started asking her for the money all of a sudden.

“Secondly, this same girl, I harboured, fed, accepted her. I took her in like a daughter, we used to play like mother and daughter. I introduced her to the Actors Guild of Nigeria, but I did not collect a dime from her. Rather I belong to an organisation, and this organisation was going on a trip in Europe and this same girl pleaded with me to add her name.

“I told her I am paying like others are paying. Can she be able to afford it? That the amount is 400k for every arrangement. She said she would go.

“All of a sudden, she woke up one morning and told me that she did not understand the process of this travel. I made several calls to so many people that know about travelling.”

Ukpabi, who shared details of Favour’s transaction, dared her accusers to provide evidence of their allegations.

The actress added that the matter was earlier taken to the police where the organisers refunded N100,000 to Favour.

‘I can’t talk to you if you haven’t made 100 million dollars this year,’ Burna Boy boasts 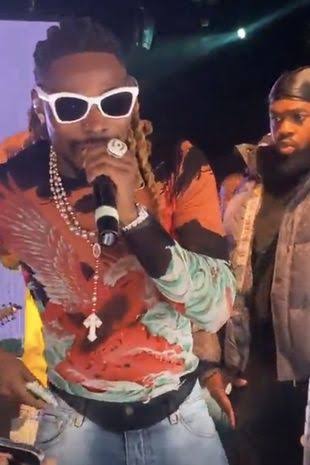