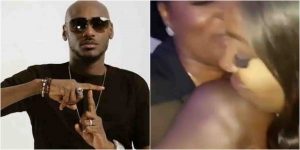 Popular Nigerian singer Tuface Idibia could not contain his tears after his wife Annie and Pero, his baby mama reconciled after years of feud.

Tuface dated Annie Macauley Idibia, Pero Adeniyi, and Sunmbo Ajaba Adeoye and had kids with all three of them within the same period. Years later, he married Annie.

Annie and Sunmbo enjoy a cordial relationship and their kids are really close, but it wasn’t the case with Pero.

Well, Pero and Annie put their differences aside at an event held yesterday at Crescendo Lounge in Ikeja. Both women hugged as Tuface’s “One Love” sang in the background.

The gesture moved Tuface to tears. He could not control his emotions and broke down sobbing as both women included him in a group hug.