13 hours ago
Signs to know a woman isn’t ready for a relationship
13 hours ago
New Video: Zlatan – Life
14 hours ago
The Nigerian police should be classed as a terrorist organisation – Popular Film Maker (Mr. Boro)
14 hours ago
“Your Side Chick Also Bleached” Etinosa Blast Apostle Suleman Preaching Against Bleaching
14 hours ago
What Is Primary Healthcare and How Does It Affect You?

Former Senate Minority Leader, Senator Godswill Akpabio, has accused the opposition party, PDP, of doing absolutely nothing to improve the lives of every Nigerian when they were in power for 16 years. 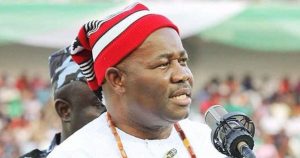 Akpabio who was a member of PDP until August  this year when he defected to APC, said this during the official reception of members of the Peoples Democratic Party (PDP), who defected to the All Progressives Congress (APC)  in Nsit Atai Local Government Area of Akwa Ibom State. He condemned the members of the opposition party in the state for destroying the campaign billboards of APC members

“If you look outside this venue, you’ll see the posters of the outgoing governor, Udom Emmanuel, they are not torn. It shows that APC is a peaceful party. While coming down here, along the Airport Road, you will notice that the billboards of the APC are all torn. We are for peace, Nsit Atai is for peace. Let me assure us all that they can only tear your posters and billboards but they cannot tear your votes come 2019. Akwa Ibom people have benefited from the Federal Government through employment, projects, and social intervention programmes like N-Power and PDP did nothing for the state in 16 years.’’ he said