The campaign team of the All Progressives Congress (APC) governorship candidate in Lagos State, Babajide Sanwo-Olu, were recently seen sharing free bottles of Coca-Cola to motorists.

We understands that this took place at the Admiralty Toll Gate in Lekki on Wednesday, barely few days to the election.

Sanwo-Olu has, at other times, shared freebies like WiFi, and rice among others.

Recently, he shared bags of rice to Civil Servants at Alausa, Ikeja.

He will battle Jimi Agbaje of the Peoples Democratic Party (PDP) as his major opponent during the election on Saturday.

Below is the video of the Sanwo-Olu campaign sharing the free bottles of Coca-Cola to motorists: 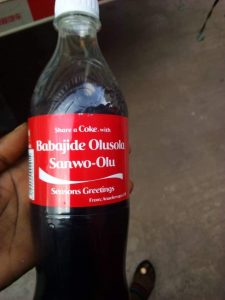