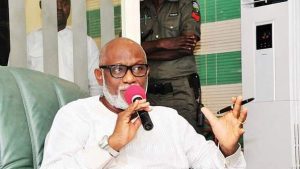 The Governor of Ondo State, Oluwarotimi Akeredolu, has ordered the immediate closure of schools situated within flood-prone areas across the state.

The governor’s directive, which will affect only public primary and secondary schools, is coming on the heels the flood occasioned by torrential rains, which have continued to ravage various parts of the state.

Recall that some days ago, a final year student of Adekunle Ajasin University Akungba Akoko, AAUA, was swept away by flood following the flash flood which occurred in the university community.

In a statement issued by the Commissioner for Information, Donald Ojogo, and made available to DAILY POST, the governor stated that the closure of schools within the affected areas, which will take effect from Monday, will last for three weeks.

Ojogo added that the move was to ensure that the vulnerable students, as well as teachers, are prevented from unforeseen circumstances pending when the rains subside.

The statement read, “Following the flash floods that have affected most flood-prone communities, especially in the riverine areas of the State, Governor Oluwarotimi Akeredolu, SAN, has directed public Primary and Secondary Schools submerged in the floods to proceed on a three weeks holiday beginning from Monday, October 14, 2019.