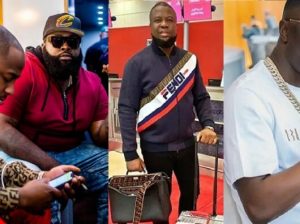 Singer Davido’s hypeman Specialspesh has called on the outgoing president of the United States Donald Trump to release alleged fraudsters Hushpuppi and Woodberry.

According to him, the way human beings forget about people and the way the world moves on so quickly is really mad and Hushpuppi and Woodberry have been forgotten so quickly.

Adding that they are the real niggaz hence calling on Donald Trump to free them before he finally hands over to the president-elect Joe Biden.