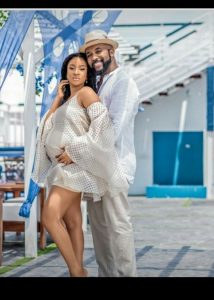 Olubankole Wellington, popularly known by his stage name Banky W, is about to release a song dedicated to his son and his lovely wife Adesua Etomi.

A year ago banky promised to release a song for a special someone, most likely for his wife. And his fans has been anticipating the new release.

Well, there’s never a better time to that than now to release the long awaited song.

God turned our tears into triumph, and our loss into laughter
He's changed our lives forever, here's to the next chapter
Nothing I can say or do can top what He gave us
My baby had a baby and he's everything we prayed for @AdesuaEtomiW
Happy birthday Mama Zaiah I love U SCATTER pic.twitter.com/n67LTzKugu