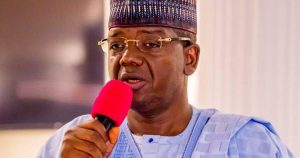 The governor of Zamfara State, Bello Matawalle, has said not all bandits who terrorise parts of the state and other neighbouring states are criminals.

The governor stated this on Thursday after meeting with President Muhammadu Buhari at the Presidential Villa, Abuja.

He explained that most of the bandits take up arms due to the injustice meted on them by some members of the society.

Hundreds of persons have been killed or kidnapped by the bandits in Zamfara, Katsina, Sokoto, Niger, Kaduna and Nasarawa States in recent years.

Contrary to the claims by the governor, there have been suspicions that the criminality is a fallout of the artisanal mining of gold, lead and other mineral resources in those areas.

Despite the attacks on innocent citizens, Mr Matawalle has repeatedly called on the federal government to grant amnesty to repentant bandits.

While explaining the reasons for the attacks, Mr Matawalle said those saddled with the responsibility of protecting the community sometimes rustle their cattle and destroy their livelihood.

He said since they have nobody to speak to, they resort to violence.

“Not all of them are criminals. If you investigate what is happening, and what made them to take the laws into their hands, some of them, sometimes were cheated by so-called the vigilante group.