2 weeks ago
“Where was this energy when I battled depression” – Tacha lambasts those telling her to be humble
2 weeks ago
Crossdresser Michelle Page calls out actor Mofe Duncan over alleged unpaid debt
2 weeks ago
“Don’t ever berate BBNaija” – Journalist Kemi Olunloyo tells Tacha
2 weeks ago
Veteran actress Iya Rainbow shows off dance steps at a party
2 weeks ago
Constitution Review: CAN Seek Ban Of Under 18 Marriages In Nigeria 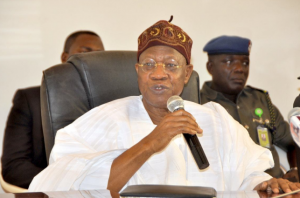 The Minister of Information and Culture, Lai Mohammed while reacting to the decision of Twitter to delete President Buhari’s tweet where he made reference to the 1966 Civil war, said Twitter had not been fair to Nigeria.

According to him, Twitter’s role on issues concerning Nigeria is suspicious and Nigeria would not be fooled. Speaking further, he alleged that the social media giant also displayed the same bias during the #ENDSARS protest.

Speaking to State House correspondents at the Presidential Villa on Wednesday, he said,

“Twitter may have its own rules, they are not the universal rules. If Mr President, anywhere in the world, feels very bad and concern about a situation, he is free to express such views.

“Now, we should stop comparing apples with oranges. If an organisation is proscribed, it is different from any other which is not proscribed.

Two, any organisation that gives directives to its members, to attack police stations, to kill policemen, to attack correctional centres, to kill warders, and you are now saying that Mr. President does not have the right to express his dismay and anger about that? We are the ones guilty of double standards.

I don’t see anywhere in the world where an organisation, a person will stay somewhere outside Nigeria, and will direct his members to attack the symbols of authority, the police, the military, especially when that organisation has been proscribed. By whatever name, you can’t justify giving orders to kill policemen or to kill anybody you do not agree with.”